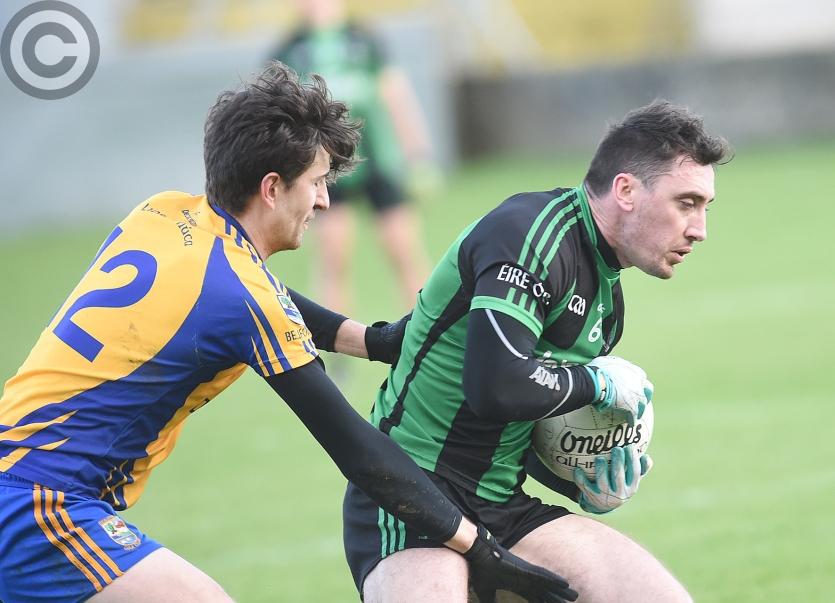 To mix the metaphors, the bigger the prize the harder the fall. One step from Croke Park, and an All-Ireland junior final, Dundalk Young Irelands’ 20-game winning streak came to an end, at O’Moore Park, Portlaoise, on Sunday.

They fell to Kerry’s Beaufort by just two points, despite playing the better football and registering some breathtaking efforts, Derek Maguire’s three-point haul in the first half being of the highest calibre, from distances that many men would fail to match with two kicks.

But, as is so often the case, especially in games with margins as fine as this, red cards can have a ruthless effect. Referee Seán Lonergan, from Tipperary, had little option but to dismiss Young Irelands’ midfielder Seán McLoughlin on 38 minutes.

The Dundalk side argue that Cian Ó Náraigh ought to have been awarded a free seconds beforehand, but, with no whistle forthcoming, McLoughlin halted the play with a hefty challenge, leading to his second booking in six minutes. Complaints, there can be none.

He was having an enormous impact prior to his departure, his full-blooded style complementing Young Irelands’ fist-tight defence. So, to lose him loosened their grip, reducing their control on a game they led by three points at half-time; 0-7 to four.

But blame cannot be based at McLoughlin’s feet; in fact, no Young Irelands man was at fault for the loss. It just wasn’t to be.

Irelands’ manager Adrian O’Donoghue cut a devastated figure, having emerged gingerly from the dressing room, his rosy red eyelids leaving no doubts over the emotional toll he was paying.

“I honestly didn’t expect to be in this position,” he said, taking his time, “I expected to be here talking about how well we played and the great win it was.

“I, personally, think we played the better football and were the better team, but we came up short.

“I couldn’t be prouder of the men that went out there. They gave everything and you can’t ask for anything more than that. We’ll just have to assess what happened and take it from there, but I can’t be any prouder of the men and their effort.”

MAN IN THE MIDDLE

Some saw the official as the reason behind the outcome. You would ultimately have to question the appointment of a Munster man for the affair given the southern province had a playing representative, but he didn’t sway the outcome, regardless of your outlook, and for him to be attacked as he made his way off the pitch, surrounded by stewards, was a despicable way to finish an otherwise enthralling encounter.

Granted Beaufort were awarded a higher tally of frees, but this was more a reflection of the respective styles of play. Whereas the Kerry outfit’s attacks were laboured and about carrying the ball forward, meeting traffic head-on, Young Irelands avoided contact and with their accuracy from range being such a theme, they were unable to get close enough to goal to draw frees, or create a three-pointer chance, which Beaufort regularly did at the other end.

Indeed, had Fergal Hallissey been in any way consistent from dead balls, the winning margin could have easily been so much greater.

A crucial instance came with less than five minutes to play and the scores tied, 0-10 apiece. Hallissey was tasked with a 40m free, with, despite the breeze at his back, the odds stacked against him, but it was brought to somewhere closer to the ‘21’ for Irelands’ resistance to the whistler’s decision; the opportunity was then so much simpler and the winger stroked over with little trouble.

And once Ciarán Kennedy followed it up with Beaufort’s 12th point, despite a late attacking flurry, the contest was up, Irelands finishing with 13 players following Dean Maguire’s black card.

“We’ll look at the video again, but I genuinely thought that we got a little bit more penalised than the opposition,” O’Donoghue added.

“I thought we were held back in tackles and they weren’t penalised, particularly in their half when we were attacking. But you can’t really blame the referee. The game was there for us.

“I can’t be overly critical of my men, but I’m incredibly disappointed and so are they. It’s a testament to the team we have, the men we have and the structure we have that with 14 men and 25 minutes left, we only lose by a couple of points.

“Losing games like this makes this group a stronger group of people; they’re not quitters, and when they gather themselves together and take a bit of a break, I think they’ll come back stronger than ever (next season) to win an intermediate championship.”