Following legend Shane Lennon into Louth team is no extra pressure for Kilkerley's new kid on the block, Tadhg McEnaney 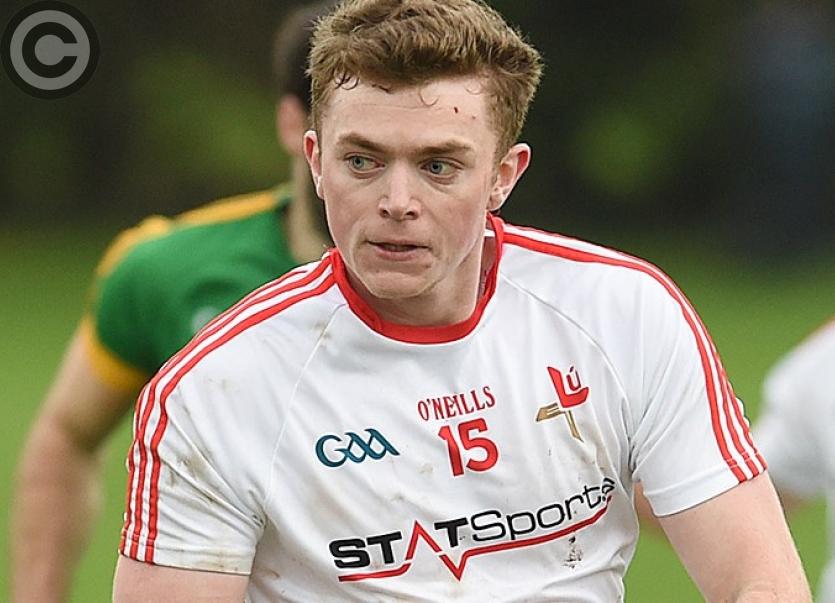 Tadhg McEnaney is hoping to follow in the footsteps of a fellow Kilkerley Emmets clubman, Shane Lennon, and remain in the Louth team. (Pic: Arthur Kinahan)

The inevitable comparison to Louth legend Shane Lennon is not something county hopeful Tadhg McEnaney wants to shy away from.

At 21, he is at the start of his second campaign with the Wee County seniors and last year ended Kilkerley Emmets’ three-season run without a representative on the Louth panel, featuring keenly early in Pete McGrath’s reign, though opportunities gradually scarcened.

He was one of the first to return to the fold when Wayne Kierans called training shortly after his appointment, something which has given him a head-start, earning him berths in both the challenge match against Meath and Wexford in the O’Byrne Cup, outings he registered tidy tallies in.

Twin towers, McEnaney and Lennon have been Kilkerley’s go-to-men since the former made his senior debut in 2014 and spearheaded their Intermediate Football Championship victory of 2015, as well as pulverising defences in Division Two this year.

With the pair being at the opposite end of the spectrum age-wise, McEnaney a gasún by comparison, a Louth call was expected, thus following one of the 2010 trail-blazers.

Pressure? No, McEnaney isn’t one for getting too stressed.

“I’d see it as an advantage because I’ve played beside Shane and I’m still playing beside him with Kilkerley,” he says.

“There would be a bit of pride involved as well. Shane was probably the only one from Kilkerley to play for Louth in a long while so I’m glad that someone is still carrying the flag.

“I was playing for Louth all the way up so moving into the senior panel was just a natural progression.”

Almost 12 months since starring in an O’Byrne Cup win in Kildare, McEnaney, who graduated with a business degree from DkIT this year, reckons he’s in the shape of his life; injury and form proving no obstacle in his promising career to date.

The weeks and games to come, against Wicklow on Saturday and Longford, could have a crucial bearing on his involvement when the National League arrives, especially with more established panellists likely to reappear - something which sparked frustration during McGrath’s tenure. Competitive and confident, McEnaney wants match- time.

“I wouldn’t be there if I didn’t want to be starting on the team, I’d be hoping for more game time this year.

“The league is fairly condensed so you’re going to be using a lot of players. I hope to get a good bulk of that and, ultimately, it’s Division Three so we’re hoping to be competitive and winning more games than not.

“Getting into the Louth panel last year was definitely progress for me, the year will definitely stand to me. I got a good few runs in the games, but probably not as many as I would have liked.

“When I came in I did well in the O’Byrne Cup and he (McGrath) was putting me in in the league. It wasn’t going well for the team and as the year went on we were getting more experienced boys back and with things not going well I think he was always going to lean towards the older lads.

“In fairness, he sat me down and said that it was my first year and to be patient so I knew where I stood.”

While many of the seasoned campaigners’ relationship with McGrath were fraught, stemming from a compound of personality clashes and the painful depression of recurrent defeats, the Kilkerley man gained from his work with the Mourne County native.

It’s a constant learning process, playing at the highest level.

“I learned a lot personally from Pete and I think other lads did too, there is no doubt about it. As a group we were probably found out and when you don’t get results people start to turn. It was just one thing after another.

“He was probably more critical than encouraging, but there was still a lot to be learned from that.

“The whole year was a learning experience. At minor and U21, obviously, you’re still playing at county level, but I think you feel comfortable there whereas this was a massive step-up, physically more than anything. The lads you’re marking are probably all physically further down the line, faster and sharper.

“We were Division Two and you got to see what is required at the level and where you have to get to. The whole thing should stand to me.”

Now under  Kierans, a selector in the previous regime, McEnaney says they will be adopting an attacking style of play, though their adaption to his coaching - typically - may take some time.

But, in terms of mood within the camp, all is positive, something that can only be enhanced further by a victory in Wicklow, one which would take their 2018 record to three wins from 12 matches.

However, on a personal level, the chief concern for the former Colaiste Rís student is continuing his fine form, with the aim of triggering an inter-county career as successful as the man he is succeeding…