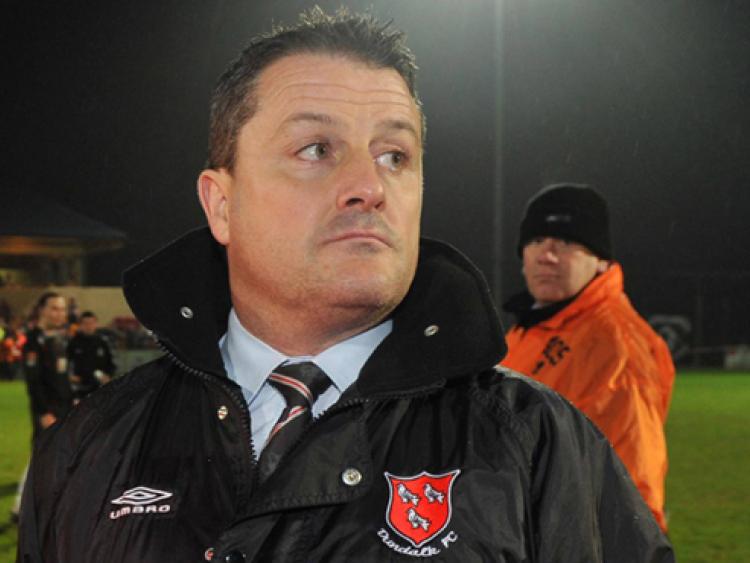 John Gill during his previous stint as Dundalk FC manager.

Twenty-four films comprise a James Bond boxset and for an aficionado as keen as your writer, it should come as no surprise that - without fail - they are all sitting on a shelf in the house. Rest assured, Christmas will be spent sifting through them, one by one.

Residing adjacent to the collection is another Bond entry, a ‘breakaway’ version. Produced by a different company, in 1983, with Seán Connery returning to the starring role, ‘Never Say Never Again’ was a remake of Thunderball (1965).

Why this title came to mind over the weekend, given that John Gill and James Bond aren’t exactly mutually exclusive, I don’t know. But - however crazily - there was almost certainly a mental link established between Connery’s comeback more than a decade after he had previously performed 007 and Gill’s supposed return to the Oriel Park hotseat which he departed so acrimoniously 10 years ago.

He hasn’t managed in the League of Ireland since.

Let’s say the flick is better left on the shelf, but Connery, at least, gained mixed reviews for his performance. “Sean Connery is compelling as an action/adventure star, with his devilish wink and Scottish brogue,” wrote one reviewer, though another was damning: “Connery was perhaps wise to call it quits the first time round.”

On the evidence of orielweb, reaction to Gill’s looming return and partnership with assistant Vinny Perth is equally fickle. Many have praised the move and while some of the support could stem from the opinion that the Dubliner was hard done by first time around, consensus suggests that it’s the ideal solution; a way of giving Perth control in all but name, with a shrewd operator alongside him.

Others approach the debate, which has had almost 350 contributors, with more pragmatism. One view, in response to a pro-Gill campaigner: “You have absolutely no idea if Vinny is ‘absolutely more than capable’. I hope he is, we all do.

“Why would someone from abroad want to ‘dismantle everything’, (whatever that means). John Gill has no experience of managing or coaching or being involved at the top end of the Premier Division or at the level required in Europe.

“Hopefully he is just here to sit on the bench on match days because I can’t see what he offers other than the pro license.”

The Pro Licence is the obvious carrot which Gill dangles, aside from his vast coaching experience and previous success, especially considering the club’s American owners were readily prepared to appoint Perth in the week following Stephen Kenny’s departure, only to cool off when it became clear that negotiations over a license dispensation weren’t going to be successful.

Gill is renowned for his decent manner with players and so there is hardly a danger of him rocking a smooth ocean liner in the form of an all-conquering Dundalk squad.

Assumedly he would be up for the role too; finally getting the chance to manage the Lilywhites in the Premier Division, having previously been dismissed despite leading them to the top-flight.

Opinion is split as to whether it’s the right thing to do: the ‘he’s the man’ brigade vs the ‘never go back’ outfit. Then football issues tend to be divisive. No supporter has a bad word to say about Gill, but not all are in favour of his return. Kenny is still The Man in Dundalk, but large numbers feel hard done by over the manner of his exit. You can’t please everybody.

Gill is ultimately the best option. Take in a foreign coach and things could become fraught on the management side. Perth is known to have pushed for the 54-year-old’s installation so, on the face of it, it’s a practical model, but only time will tell how perfect.