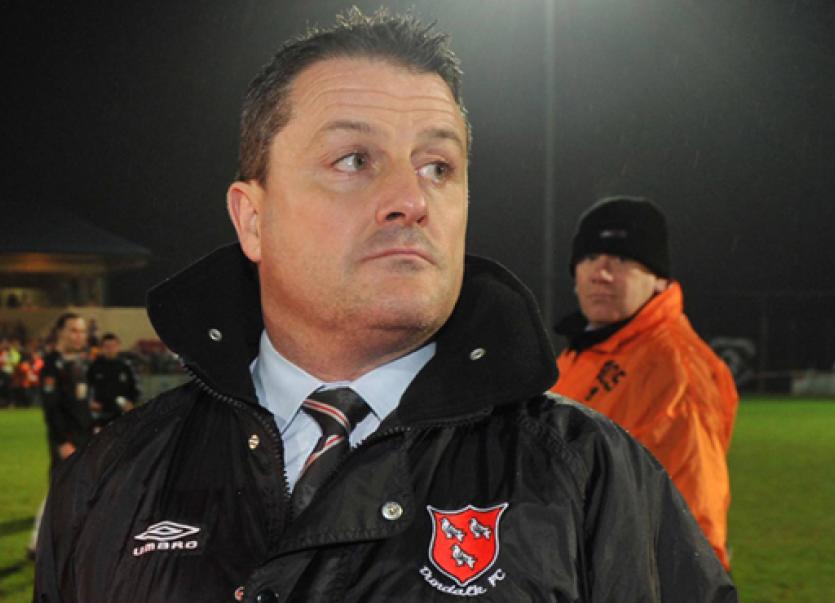 John Gill during his previous stint as Dundalk FC manager.

John Gill could be named as Dundalk FC’s new manager as early as this week with Oriel Park chiefs set to break for Christmas holidays.

The 54-year-old, who led the Lilywhites to the First Division title during his previous stint at the helm, between 2006-’08, is believed to have met with Dundalk CEO Mal Brannigan last week to iron out a deal which will see him work alongside assistant Vinny Perth.

Perth has been looking after team affairs since Stephen Kenny’s dramatic departure last month after six years in charge.

Along with Gill having the mandatory UEFA Pro Licence, key to his appointment is the close relationship he shares with Perth; the pair having worked together previously at Malahide United, where Gill was integral in the 42-year-old receiving the manager’s job prior to moving to Dundalk.

The club did approach the FAI in relation to a dispensation for Perth on the grounds that they would drop the compensation fee they’re entitled to for Kenny. This was, seemingly, rejected, though.

Since controversially leaving Oriel in November 2008, Gill has worked within the backroom staff at St. Patrick’s Athletic, Shamrock Rovers and most recently under Pete Mahon at Drogheda United.

Given the success he enjoyed during his first spell, where he twice led Dundalk to the First Division promotion play-off before securing the title in season three, Gill would be a widely welcomed instalment.

A number of names have been linked to the post in recent weeks, including U19 coach Mick Neville, ex-Ireland boss Steve Staunton and Englishman Paul Clement, who was sacked by Reading in November.

But Gill has remained at the summit of bookies polls, with Paddy Power even suspending betting on his appointment on Sunday.