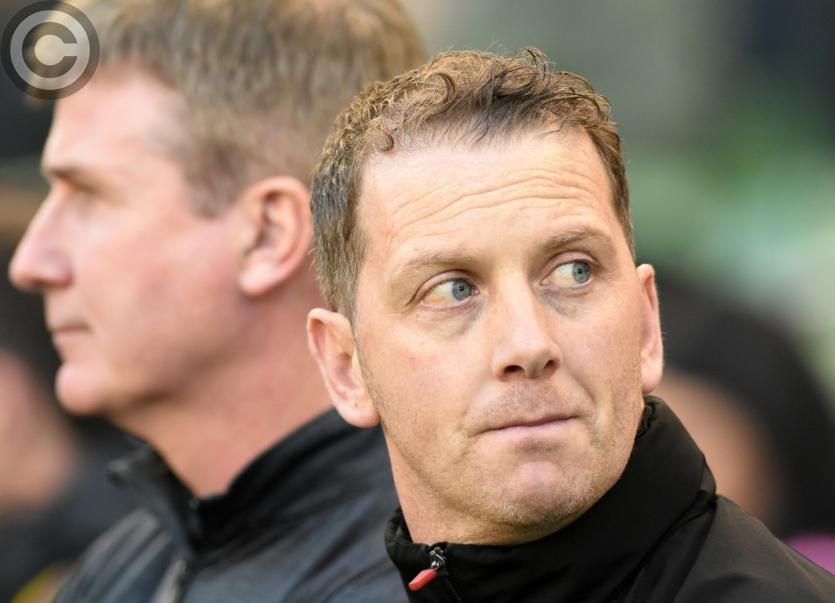 Vinny Perth says Dundalk FC are in “a really strong position” despite having not yet appointed Stephen Kenny’s successor as manager.

Kenny’s former assistant, Perth has been charged with looking after the football side of operations at Oriel Park since the former’s six-year reign ended a fortnight ago, putting all the pre-season plans in place as well as playing an integral role in the re-signings of Dane Massey and Robbie Benson.

He lacks the mandatory UEFA Pro Licence qualification to officially assume full control, but the 42-year-old is expected to continue in a senior management position in any potential regime.

“I’m in a really confident mood and, in some ways, I think this is the best position we’ve ever been in, from my level down,” Perth told Live at Oriel.

“Everything is planned between now and the first game of the season and signings are expected over the next couple of days.

“I’m working harder now than I ever have because Stephen has left and all of the planning, pre-season and signing of players is down to me at the moment.

“I’ve been in Dundalk probably every day (since Kenny’s departure) and we’ll continue to work hard, myself, Mal (Brannigan) and Martin Connolly.

“The owners have backed what we’re doing at the club so the club is in a really healthy position. Everyone would like to know more information, but we’d just ask people to trust (us); I was doing a fair bit of the work before now and I’ll be doing a fair bit now. There is nothing to be worried about.”

The Dubliner expects new signings in the days ahead, while also confirming that prospective candidates have met with the club for discussions.

However, he stressed that betting on Kenny’s successor is a futile exercise.

“I ask people not to put any money on (with) any bookmakers. There has been a lot of rubbish spoken.

“As a club, we’ve spoken to a couple of different people. Some of them have been mentioned and some of them haven’t, you’re about to lose money unless you’re being very careful. Buy a season ticket instead. You’ll get more entertainment out it at Oriel Park next year.

On Kenny’s leaving, Perth added: “It’s been a whirlwind for the last (number) of days. You get mixed emotions. When you work with someone for such a long time, but there are bigger problems in life than Stephen moving on.

“I’m very proud to be associated with (Stephen) and very proud to have played a part in his success, but (I’m) bitterly disappointed that that partnership was broken up. I felt we worked well together and got the best out of each other so when that is broken up, there is a bit of disappointment.

“It’s a shock to everybody because we all thought Mick was getting it, but it can’t be a shock that someone so successful moves on from our club.

“Some people question whether, just because you’re doing it at League of Ireland level, you can manage your senior team, but I think if this was any other country in the world, in Slovakia or Belarus or Iceland, someone being so successful, winning your national league, would have been appointed senior manager at some stage. It’s just recognition he deserves for all his achievements.

“I think he’s extremely disappointed that he couldn’t let the players know personally and the staff personally. It’s the way of the world; we met at around 6:15pm (on the Saturday) where he officially told me all of the details. We were still sitting together when it was leaked.”