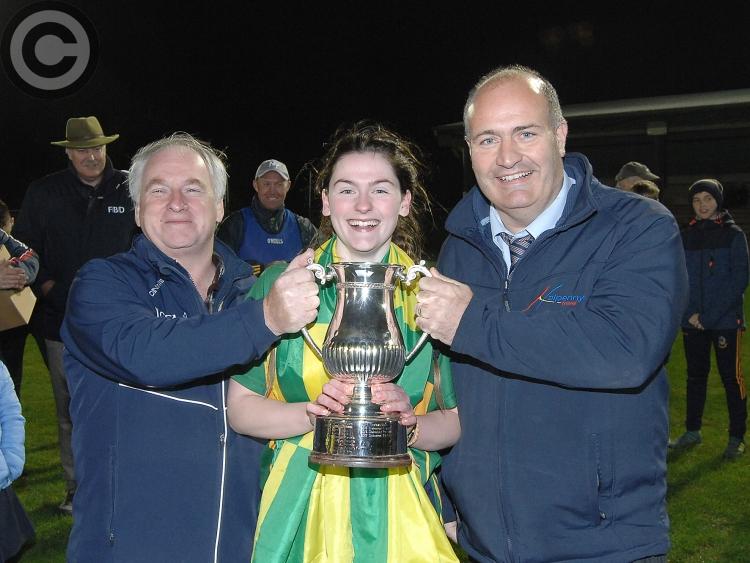 Cooley Kickhams ended a five-year wait on the Louth senior championship title at a packed Stabannon on Friday night.

The peninsula girls were much the better team, building a lead despite bearing the brunt of the first half conditions, as Geraldines lost a second decider in three seasons.

Kickhams may have entered as underdogs, but they had all the top performers with wingers Lauren Boyle and Niamh Rice underlining the precociousness of their talents, alongside the steadying influence of Patsi Boland in midfield.

Boyle, in particular, was outstanding and the only player-of-the-match candidate. She struck six points, but almost deserved the accolade for her strength of character alone. Having missed five attempts at goal as the final quarter approached, the teenager defied logic to convert in crucial moments, shooting four points as Cooley recorded six on the trot.

“It’s the best feeling ever,” said a jubilant Boyle after the game.

“We were put down as underdogs and it makes you want to win even more. We put in the hardest work all year, we’ve never been so close and for our management, especially Alan (Page), he’s been dying for a championship and he’s finally got one.”

Somehow, after Victoria Prendergast and Rebecca Carr had found the net within four minutes of each other, shortly after half-time, Kickhams trailed having dominated.

They took a five-three lead to the break, but the match’s tendency was altered drastically after the contest’s only two goals, Prendergast’s, a bullet of a strike, coming out of nowhere before Carr’s deceptive free-kick caught Cooley ‘keeper Sineád Rice off guard.

However, the lightning Rice came to the fore, exhibiting her searing pace to reduce the gap to just one, with a brace, before taking flight once more, cutting the Gers defence open and rifling towards goal. Caoimhe Byrne had a fine outing between the Haggardstown team’s posts and produced one of three top-class saves to ensure Gers remained in front.

It proved to be only a momentary reprieve, but while Rice was showcasing her abilities, her mate, Boyle, was struggling as her wand of a left boot waned of its magic. Though the lapse didn’t last long and as Boland and Siobhán McDonald, the scorer of a first half point, took over at centre-field, the No. 10 was given a platform to star.

Time was effectively up - and Cooley 0-12 to 2-4 in front - when Carr bagged Gers’ only point of the second period, in stoppage time, reducing the margin to just two. Megan Ferguson, with the game’s final score, ended their comeback aspirations, however; putting a fairly conclusive look on the closing margin.

Ultimately, Cooley were deserving winners, earning their 10th crown, and Geraldines had no complaints about the outcome, having stood sportingly for the presentation to Claire Donnelly.

A classic final also brought with it a customary conclusion. They’re still partying out Cooley way...

Mind, with Offaly's Naomh Ciarán to come in Leinster tomorrow morning, the real celebrations may be delayed slightly.