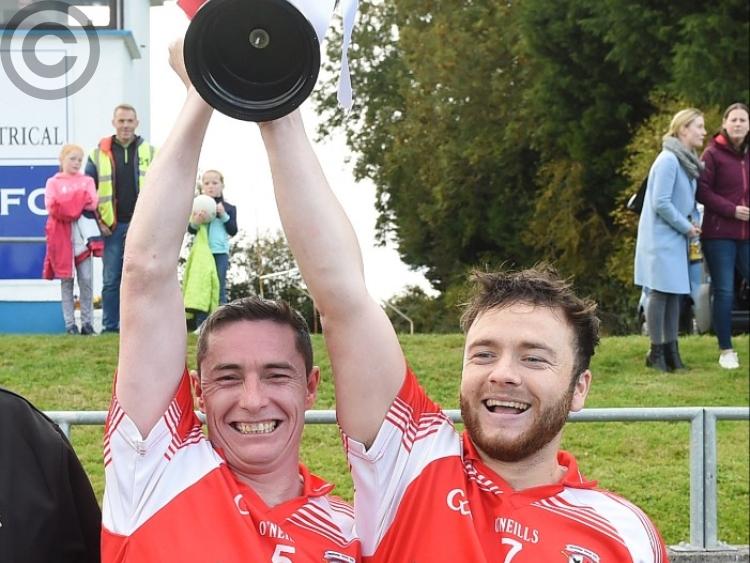 Knockbridge put in a fantastic second half display to claim a first Senior Hurling Championship title in four years at Páirc Uí Mhuiri on Sunday afternoon.

Their 11th title since 2000, it brings up a double for Tony Teefy’s men, who finish the year unbeaten and boasting both league and championship silverware.

Top-scorer Shane Fennell contributed largely to Knockbridge’s recovery, shooting five points in the second-half. However, it was the performances of Ronan Byrne and man-of-the-match Gerry McKeown that were most influential, the latter scoring his team’s third goal somewhat controversially.

The spoils were well on course for Knockbridge by the time he launched an effort goalward. It looked set to be a routine collect for Fechin’s ‘keeper Stephen Hackett and it was after a momentary spillage, clearing his lines having grasped the ball at the second attempt. But umpire Mickey Boyle went straight for the green flag, adjudging the custodian to have handled it behind the goal-line, and after speaking with match referee Kevin Brady the goal was awarded, much to the Hoops’ dismay.

For McKeown, it was some reward for a powerful display. The forward was everywhere during the period where the ‘Bridge turned the tide, recovering from a point behind at the break to eight in front early in the fourth quarter, following his goal.

Fechin’s, so dominant in the first half, failed to build a substantial enough lead, conceding two soft goals, even with Knockbridge struggling to find their rhythm. Fennell’s major in first half injury-time meant his side trailed by just one when it ought to have been - and needed to be - so much more.

Midfielder Paddy Lynch was supreme in the first half, leading Fechins’ cause as they repeatedly made the ‘Bridge pay for handling errors and wayward distribution. The Louth marksman, Seaghán Conneely and Paul Matthews all found range in the early stages, before the former exchanged points with Gareth Hall to ensure the two-time champions remained three clear.

A long ball from Seán Marry - another to come alive in the second half - produced the game’s opening goal on 11 minutes, as Hall used his physical presence to bat the dropping sliotar to the net.

Yet the Reds remained second best, conceding 1-3 over a 10-minute spell where Fechin’s totally dominated. David Stephenson got the goal, stroking past James King from close range.

Michael Ryan pointed soon after, ensuring Cathal Ryan’s side of a 1-7 to 1-3 lead. But the tricky No. 13 was unable to convert a gilt-edged goal opening just two minutes later and how crucial it was to prove considering Fechin’s next score wasn’t to come until 21 minutes into the second half.

And Fennell provided the ‘Bridge with a lifeline going into the dressing room having sent a groundshot to the corner of the net, although Hackett maybe could have done better in his attempts to divert the ball away.

It evidently provided the winners with a boost, while having a counter-effect on Fechin’s, who have now lost the last two finals. Fennell (four frees), Hall and Marry had Knockbridge five in front before McKeown’s goal. Lynch (free) and Crosbie brought it back to six, but another three-pointer, this time from Ronan Mulholland, ensured the Reds sprinted across the finishing line, collecting the Paddy Kelly Cup once more.