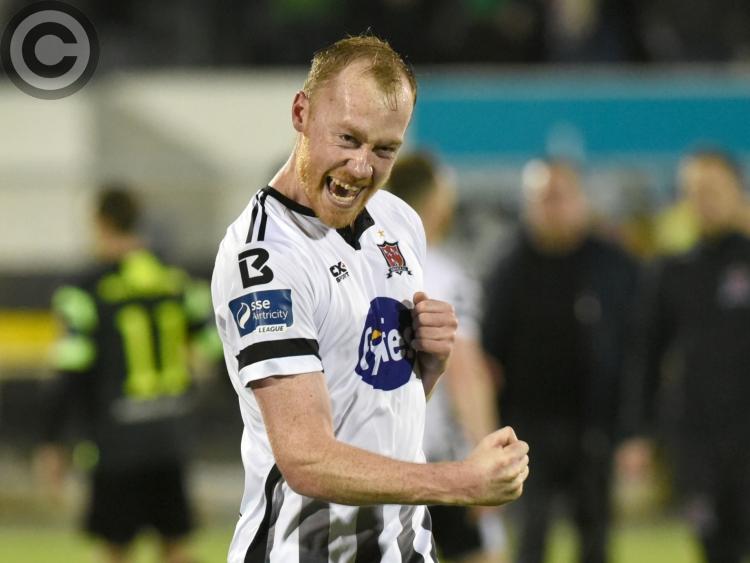 A rocket from Patrick McEleney sent Dundalk FC into a fourth consecutive Irish Daily Mail FAI Cup final on Friday night as they kept dreams of a double in the melting pot.

The Derryman broke a solemn deadlock four minutes from half-time as the Lilywhites earned a place in the national decider for the 18th time, and a lead they never looked like relinquishing, despite failing to find any sort of consistent rhythm.

McEleney’s right-footed effort to the top corner was the game’s first shot on target, yet it more than made up for a lifeless opening - and match - where referee Robert Hennessey was involved quite often.

Daniel Cleary can count himself very lucky to be available for the November 4 showpiece. The defender ought to have seen red in the first half, having jumped recklessly into a challenge with Conor Davis, skewing over the top of the ball and into contact with the visitor’s leg. It caused a minor melee, after which both players were yellow carded; Davis for his reaction, which was understandable in the circumstances.

And minutes before the breakthrough, Seán Gannon looked to have been denied a stonewall penalty when tugged as he entered the penalty area. However, the whistler waved away the strong pleas for a spot-kick.

The latter incident came at a time where the Lilywhites were beginning to up the pressure levels as UCD became progressively less compact. A goal wasn’t altogether inevitable, but once it arrived the outcome was all but a foregone conclusion with the Students limited in attack.

In fairness, Collie O’Neill’s men were improved in this sense in the second half. Captain Gary O’Neill had Gary Rogers scrambling across goal from a free-kick, but Dundalk coped comfortably with anything to follow, weathering a late period of pressure.

Patrick Hoban - seeking his 28th goal of the campaign - thrice forced Conor Kearns into action in the second half, while UCD huffed with little puff. Rear-guard action was in short supply, in truth, not that the Lilywhites were overly bothered.