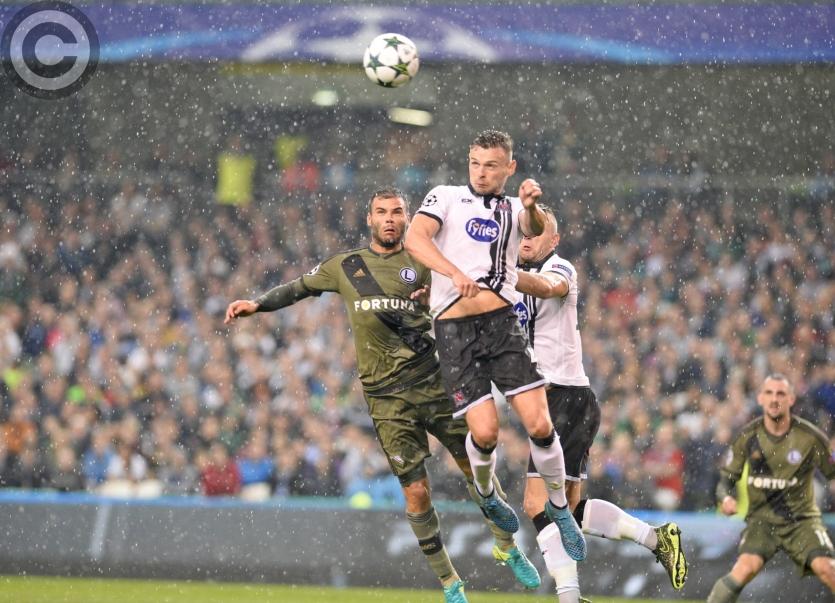 Andy Boyle was Stephen Kenny’s ‘best kept secret’ at Dundalk FC until the European exploits of 2016 put him to the front and centre of the Oriel Park window.

Since taking the reins of Dundee, manager Neil McCann has discovered a few gems and if Boyle can find his form of a few seasons back, the Scot could have another below-radar star on his hands.

After all, the 27-year-old made the move north from Preston on deadline day, initially for the season, though with his North End deal set for expiry next summer, it’s unlikely that he’ll line-out in the Deepdale club’s colours again.

“I had some interest throughout the summer and we were holding out to see what would be the best option,” Boyle says of his move down a crackling phoneline.

(The rain pelts the window, bringing to mind thoughts of the Tallaght victory over BATE Borisov - one of Boyle’s finest ‘hour-and-a-halves’.)

“It’s not always the easiest thing to do, making the best decision careerwise. The Dundee thing came up during the summer and then a couple of weeks later, towards the end of the window. It’s a good move for me, a chance to play some games at a good level.”

It’s been a frustrating time for the centre-half, whose staggering growth at the Lilywhites, which he credits a portion of to Kenny’s unique man-management skills, earned him not only a move to England, but a shot at international football and a few caps for Ireland, a tally which he’s actively seeking to add to once back playing regularly.

Simon Grayson took him to Lancashire, reckoning the dizzy Dubliner was good enough to play in the English second tier having just come off the European ‘merry-go-round’ with Dundalk.

He featured sprightly in the early months of 2017, shortly after making the move with Daryl Horgan, whom he faced on Saturday when Dundee took on Hibernian at Dens Park. Hibs won, 3-0.

But Grayson’s summer exit, to take up the Sunderland hotseat, saw Alex Neil’s arrival as Preston boss. And, ultimately, the Scot saw others as superior to Boyle and after featuring in the League Cup loss at Accrington early season, playing opportunities became sparse and life difficult.

“Mentally you have to keep yourself high, but that’s probably easier said than done, and looking back, it wasn’t an easy time.

“I had a year or two leading into coming to Preston where I probably have my best memories in football: what we did in Europe and at home with Dundalk, getting international recognition and playing in the Championship.

“The change of manager didn’t help, of course. The manager who brought me in went and the new manager came in and wanted different things.

“I think any time that I played with Preston I did well and there was a little period last October or November where I played three or four times and did well. There were a couple of injuries at the time and you get your chance. If I recall in one or two of the games I got Man of the Match and then we played away to Bristol City after keeping a clean sheet at Bolton and I wasn’t in the team. It was difficult to take.”

Now at the beginning of this year, it became clear that he needed a move if he was going to play. He had to “push” his way out to some degree in securing a loan move to Doncaster Rovers in League One, a transfer which proved fruitful to start with before an injury practically put an end to his time in Yorkshire. Back to Preston he went, where it was fairly evident that his face didn’t fit, leading to the Dundee transfer.

He doesn’t recall looking at many of Darren O’Dea’s columns in the Star whilst in Ireland, so his reading of his defensive partner’s play is not booklike, as yet, he laughs, unlike his comprehension of Brian Gartland or Dane Massey, for example, whom Boyle achieved great feats alongside at Dundalk.

The team spirit nurtured in Kenny’s league and cup winning squads of 2014 and ‘15, and in the trail-blazers of ‘16, is something he accepts will be hard to replicate elsewhere.

He still speaks of the club, of Kenny, so fondly.

“Dundalk will always have a big place in my heart. (Pausing, before adding:) The trophies we won and the games we played in, they were amazing nights and memories I’ll have forever.

“Stephen, I just can’t thank Stephen enough for what he did for my career. He gave us the confidence and had the belief in his team to play a certain way and, when we went into Europe, to play differently than Irish clubs had previously.

“It wasn’t about going long and playing off ‘seconds’, he wanted us to play with a bit of bravery and to get the ball down to match the big clubs we played.”

Andy made his debut at Ibrox recently, as Dundee surrendered, 4-0. They play Celtic before the end of next month.
But all the while he’ll be keeping an eye on Dundalk, on the ‘LiveScore’ app to be precise.

Will he return to the League of Ireland some day?