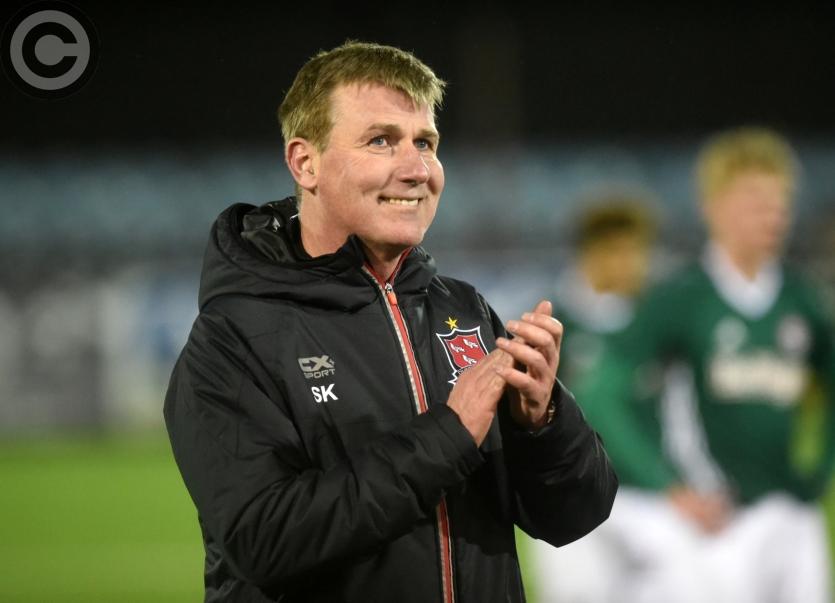 Dundalk FC are champions of Ireland in all but name.

Tonight’s 3-2 defeat of Derry City at Oriel Park didn’t crown them; however, it puts Stephen Kenny's men 12 points clear at the Premier Division summit and with four games to play, their goal difference is much superior to that of Cork City, to the tune of +25.

In many ways it was a victory made in Derry, with winger Michael Duffy instrumental in two of three first half goals, the second of which was converted by the impressive Patrick McEleney.

The visitors had actually started the brighter, going close on a couple of occasions, including when Darren Cole put a free header over the ‘bar.

But once Daniel Cleary nodded to the net for his second of the campaign - on 16 minutes - the Lilywhites were relentless, adding another four minutes later. McEleney was the scorer, rifling across goal and into the corner off the post.

The third, a minute from half-time, topped the lot, though. Patrick Hoban levelled Richie Towell’s league record by striking his 25th of the season, high to the top corner from just left of the area.

Now on course for the outright record, the Galwegian became locked in a personal duel with Derry stopper Ger Doherty in the second half, passing up two glorious opportunities before seeing an effort ruled out for offside and another tipped away by the flying Doherty. It just wasn’t to be his night before departing to a standing ovations late on.

Against the run of play, Kenny Shiels’ side pulled a goal back with 20 minutes to play. After Gary Rogers had stopped Adrian Delap’s weak attempt, Dundalk left-full Dean Jarvis - against his former club - was helpless as the ball deflected off him and across the goal-line.

And another followed for the Foylesiders as substitute Ben Fisk rounded Rogers and found the net.

That placed a rather blurred look on what was a dominant Dundalk victory. Nevertheless, a night of celebration wasn’t to be taken from, the Lilywhites have a 13th championship within their grasp.

In the final minute, Derry’s Kevin McHattie saw red for pulling back Dylan Connolly as the winger broke through on goal.