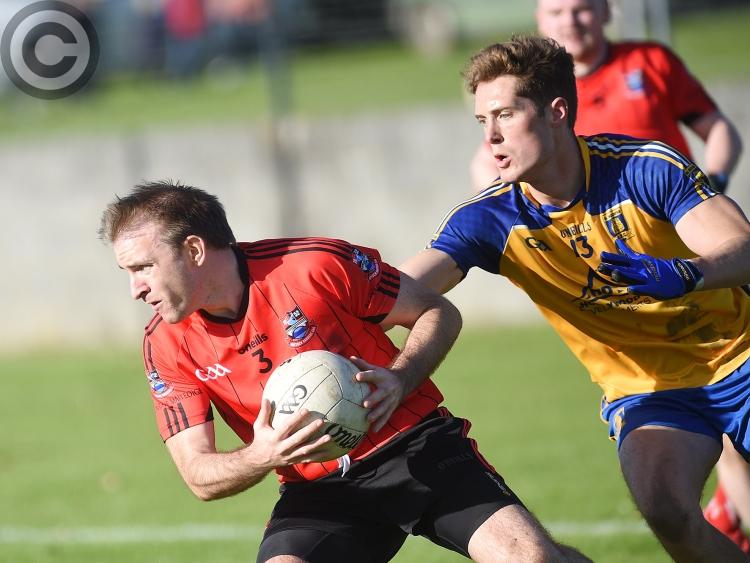 St. Mochta’s produced a memorable team performance to put themselves on the brink of senior football as they came out on top in this Intermediate Championship semi-final at Ardee on Sunday afternoon.

For the opening three quarters, this proved to be a very cagey affair with neither team willing to take any risks. However, it burst into life in the final quarter as Mattock threw everything at the Mochta’s in an effort to rescue the game.

However, Seamus McGahon’s charges refused to buckle under the intense pressure and finally clinched victory when Eamon O’Neill landed a fine point on the break deep into injury-time.

Another reason for the Mochta’s to celebrate was the return of CIarán ‘Casey’ Byrne to the yellow-and-blue and while he may still be a little rusty, his physical presence was vital in the closing 20 minutes, while he also won a crucial free that brother, Declan, converted.

The tone for the game was set as early as the first minute when David Lennon produced a brilliant block to deny Adrian Reid, and to a man, the Mochta’s players displayed that type of never-say-die attitude for the remainder of hour.

It was an approach that certainly knocked Mattock out of their stride and that was evident with the game’s crucial score on 15 minutes when the defence failed to deal with a high ball from Darren McMahon and Declan Byrne poked home the loose ball.

That put his side 1-1 to 0-1 ahead and it was just reward for their efforts in the opening half. Mochta’s might have had a second goal when Jamie Farrell’s soccer-style cross was blazed over the bar by the impressive Stephen McCooey for a score that helped his side lead by 1-4 to 0-5 at the break.

The Mattock attack were finding it very difficult to create any space in front of the posts, but points from David Reid (3), Adrian Reid and Ryan Leneghan kept them in touch at half-time.

The Collon side came out with more purpose in the second half, but Mochta’s continued to have the upper hand and points from Byrne (2) and Andrew English had them 1-7 to 0-5 clear after 40 minutes.

It looked like the Louth Village men would see the game out as the gap remained at five with just over six minutes remaining.

However, Mattock threw caution to the wind and points from David Reid, JP Watters and Alan Caraher followed by an effort from the excellent Adrian Reid, saw the gap down to just one. However, Mochta’s defended for their lives in the closing minutes and in the dying seconds, Emlyn Clerkin plucked a dangerous ball from under his crossbar and launched a quick counter which resulted in O’Neill slotting over the insurance point.

They will now meet St. Fechin’s in the October 14 decider - a repeat of the 2009 junior final, won by Mochta’s.