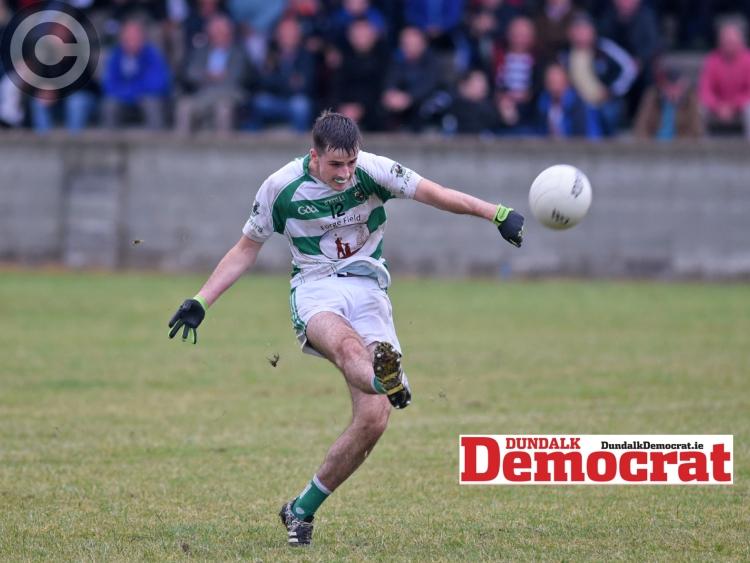 St. Fechin’s started and finished strongly to book their place in a first intermediate final since 2014 at Dunleer on Saturday night.

Having rushed into a 1-5 to no-score lead, mainly through the exploits of Ronan Holcroft, Fechin’s lost their way as Naomh Fionnbarra recovered to head the match into the final 15 minutes.

However, a long punt from Bevan Duffy saw his brother, Eoghan, beat ‘Barrs ‘keeper Andy McCann - who would have been better served to let his defenders deal with the raining delivery - to the ball with his fist.

The goal tied the game and provided a spring to the step of Eugene Judge’s men, who powered over the finishing line, while the Togher outfit were left to ponder what might have been, especially had Bernard Osborne’s first half penalty found the corner of the net as opposed to clearing itself off the butt of the post.

Fechin’s left-half Matthew Flanagan was their unlikely match-winner, his move across the backline and Paul Matthews’ switch to the 40 had desirable impacts. Flanagan shot over three second half points, including the levelling effort before Duffy’s goal shoved the winners 2-10 to 2-7 in front, and from there it was mainly one-way traffic as the ‘Barrs visibly wearied.

Paddy White’s team were evident energy expenders in the match’s middle-third, having given Fechin’s an eight-point head start. Holcroft fired 1-3 in a flash, but once they got a handle on the Louth forward they had a platform and Conor Osborne’s trickled goal on 19 minutes began the revival.

Trailing by four, Jack Butterly earned the penalty which Woods was primed to take, only to yield for Osborne, who beat Niall McDonnell, but not the upright.

Yet the ‘Barrs registered 1-3 on the resumption to lead by three. Their intensity was levels above that of Fechin’s, who were squirming along in comparison. The major saw Woods palm to the net.

Cue Flanagan’s impact, either side of Holcroft and Bevan Duffy points, and Duffy’s goal which Paul Matthews supplemented by scoring for the only time.

Woods closed the gap to three, but Fechin’s responded, with Holcroft and, fittingly, Flanagan booking them a date in the October 14 decider.

They entered four years ago as favourites against Sean O’Mahony’s. However, their tag will carry less weight on this occasion - which makes them a dangerous proposition for either Mochta's or Mattock.