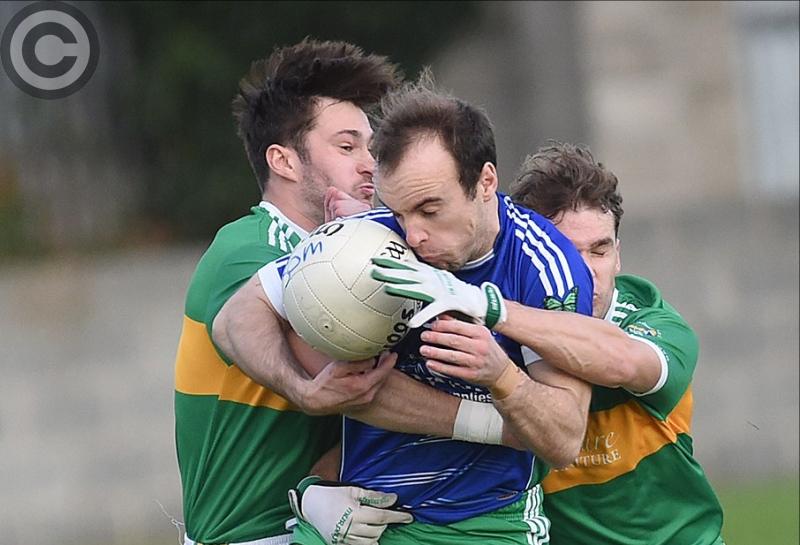 The game of the weekend was saved to last as St. Patrick’s qualified for their first Senior Football Championship semi-final since 2015 with a one-point victory over Sean O’Mahony’s in a full-blooded contest at Páirc Clan na Gael.

An enthralling encounter which ebbed and flowed, referee Desmond McDonald let the match go. However, in doing so, the St. Nicholas whistler allowed the physical exchanges to fester into a somewhat farcical territory. That, and the poorly lit conditions, contributed to a frantic and fairly dangerous finish which saw black cards, a red for Cathal Grogan - shortly after he had landed what emerged as the match-winning point - and quite a few ‘fisty-cuff’ episodes.

Indeed, after what was an epic tussle, it was disappointing that the official and his leniency was the topic of many a post-match conversation. What should have been a night of celebrating Paddy Keenan’s genius and O’Mahonys' never-say-die attitude returned a rather uneasy closure as emotions simmered both on and off the pitch.

The first half was a dogged affair with Pat’s - led by the returning Keenan - in control, yet that failed to translate itself onto the scoreboard. They led by three in the dying embers of the opening period, at which point Ben McLaughlin punted goalwards. Pat’s ‘keeper Seán Connor fumbled with Conor Crawley there to pounce, toe-poking the ball to the net to send the teams to the break level, 1-3 to six points.

O’Mahonys’ entire full-back line were justly booked before half-time. Indeed, Chris O’Neill was treading dangerous waters due to his robustness in the tackle and while they did well to finish with the full complement, there was a tendency among the O’Mahony’s numbered 2 to 4 to stand off somewhat in the second half.

Danny O’Connor’s levelling point in the final quarter was a perfect example as Ronan Byrne was left shadowing the Pat’s finisher, allowing him the space to whip it over from the right touchline.

After 60 minutes, the game was tied and a draw looked the inevitable outcome - for all parties, it would probably have been the fairest result even if the Lordship side were better for longer.

Grogan, whose brother, Conor, was a Man of the Match contender, broke the deadlock with a distant effort, before seeing the line for a high challenge which infuriated the O’Mahony’s reserves, who rushed onto the field in protest.

They got a final opportunity to save their season when Conor Finnegan was handed a 45 in a central channel. He pulled it left, however, as Pat’s progressed - just.