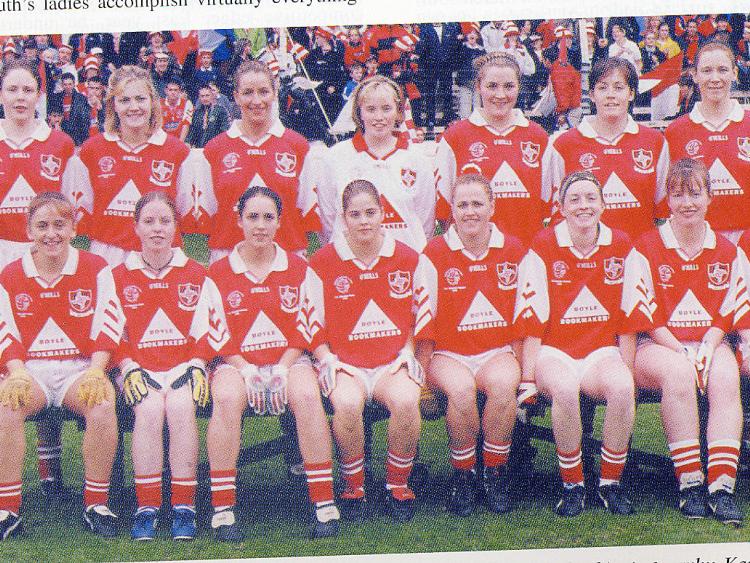 Louth won a first All-Ireland ladies’ title that day. The juniors’ 4-8 to 2-9 defeat of Roscommon was at Croke Park, and for the first time ever, the buzzer, which today is a major feature of the ladies’ game, was sounded to bring a hugely exciting game to an end.

Much less important that day was my presence in the Croker crows’ nest, pencil and paper at the ready, to witness history being made. My tenure on the Demo sportsdesk, which had begun two decades earlier, was drawing to a close, and this was my ladies’ football debut.

It’s not that the code had been ignored by the paper up to that. Club matches, first played in the county on an organised level in 1993, were provided with lots of coverage, the data supplied by club officials who were every bit as enthusiastic as their men’s football counterparts. And when county teams were engaged, Dermot Woods, who, a quarter of a century on, retains a passion for the game, would put pen to paper.

As is the case today, Woods was chairman in 1998, filling a role occupied by Michael Heeney when the first County Board was formed six years earlier. For the record, other officers in 1993 were, Anne Woods (secretary), Pamela Kirwan (treasurer), Olive Connor (PRO) and Catherine McArtain (registrar). Five teams, St. Joseph’s, Cooley Kickhams, Clan na Gael, St. Fechin’s and St. Patrick’s played in the inaugural competition, for which Dundalk-based insurance man, Brendan Watters, donated a trophy.

Woods was a regular visitor to the office as the 1998 Leinster junior campaign gained momentum, and his infectious enthusiasm must have had an effect. He told us the stories of the early round wins over Offaly and Kildare, and these were put into print. In neither tie was Louth troubled, and it was quite obvious the team coached by Tony Melia and selected by Melia, Joey Kirk and Dermot Agnew, was going places. Already in the bag was a very successful league campaign
Carlow were Louth’s opponents in the final. What was expected to be a difficult assignment turned out to be nothing of the sort. Louth took charge from the first whistle, and with scores coming with regularity it ended with a 6-14 to 2-5 scoreline.

All of the three provincial wins were away from home – the All-Ireland semi-final, however, would be at the home of Naomh Malachi, in Courtbane, with Tyrone providing the opposition. It was set to be played in late August, but the dreadful Omagh bombing intervened. September 11 was the new date.

The Red Hands had a good pedigree. They’d been unbeaten in Ulster in four years, and when they went into a 1-3 to nil lead early on, the odds on them extending a proud provincial record were short. But Louth, facing a stiff challenge for the first time in the campaign, responded well to the urgings of their management and the biggest crowd they had ever played before.
The dividing margin was down to three points at the break; in the second half Louth would play with the assistance of a strong breeze.

Play had only restarted when team captain, Cathy Reynolds, had the ball in the back of the Tyrone net. After that most of the play was towards the Tyrone goals, and as Louth edged further and further ahead, Cooley’s Elaine Rogan was supreme, racking up an eight-point tally.

Call it bandwagon- jumping if you wish, I had my seat booked for Dublin long before the final took place; Woods could concentrate on his chairman duties and not have to worry about who scored or was coming on as a sub. And though I wouldn’t have to cover it – that was a job for Castleblayney’s Joe Hanratty – the senior final on the double-header was of interest because Monaghan were involved.

While it wouldn’t compare with the crowd expected at next Sunday’s three-final programme, 16,000 was a good turn-out at Croker. The crowd witnessed a thrilling opener. Both sides enjoyed spells of supremacy, Roscommon first to take control. The Westerners had 1-3 on the scoreboard while Louth struggled for a first score, and that lead would have been greater had it not been for some wonderful goalkeeping by Lyn Savage, at 15 the youngest on the Louth team.

Elaine Rogan’s long-range shot should have been stopped but wasn’t. Her goal helped Louth get to within a point at half-time, a situation that had hardly looked possible as a one-sided first half progressed.

But there was nothing lucky about the goals Róisín Hanlon and Nuala Murphy bagged early in the second half, putting Louth in front for the first time. Now comfortably ahead, the Melia-coached side looked set for what would be a history-making victory. However, before it was eventually achieved, Louth had to withstand a spirited Roscommon comeback that brought the Connacht girls to within a couple of points.

All concerns vanished when Rogan, perfectly positioned near the Roscommon goals, got a touch to a Lorraine Muckian ‘45’. The ball ended in the back of the net and that was that. Louth, 4-8 to 2-9 in front, were champions of All-Ireland for the first time.

The celebrations, which began when Carlow referee, Christy Haughney, blew full-time, taking his cue from the clock on Hill 16, were short-lived. Unknown to his daughter, Cathy, as she was being presented with the West County Hotel Cup, Brian Reynolds, a championship-winner with Stabannon Parnells and selector with the Louth 1957 team, had taken a fatal seizure coming towards the end of the game while watching from the Hogan Stand.

“A great win tinged with sadness” was this paper’s main headline over a two-page spread, which had a variety of stories covering all features of a historic occasion.

This was one of two All-Ireland titles that came Louth’s way that year. Cooley, supreme in club football, won the county and provincial titles before going on to record a tremendous treble.