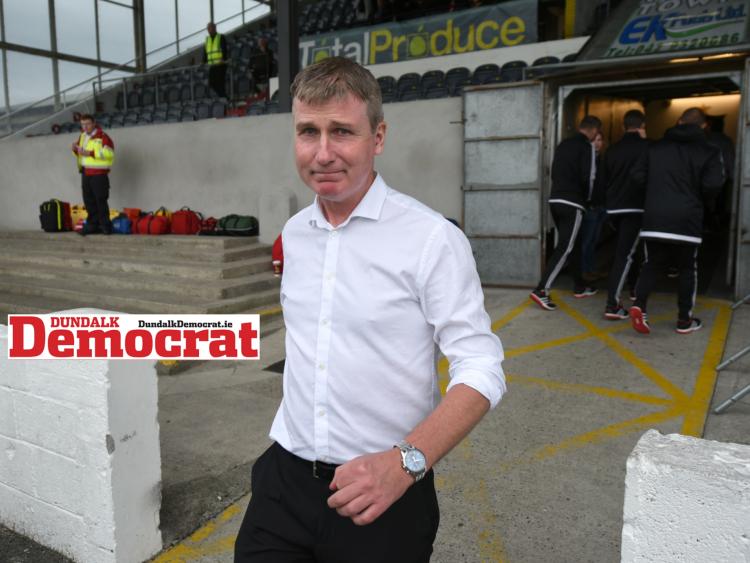 Last night's controversial league affair between Dundalk FC and Shamrock Rovers was aptly summed up by the differing post-match views of both managers, Stephens Kenny and Bradley, over the game's decisive occurrence.

A penalty awarding to Rovers three minutes into second half injury-time, for an alleged foul on Ronan Finn by Seán Gannon, allowed Dylan Watts to stroke home the winner from 12 yards, and the hosts let their grievance be known to referee Robert Harvey, who red carded Seán Hoare for his protests after the full-time whistle.

"The penalty is not a penalty. It's a corner, Seán Gannon's cleared it. The referee's made a big call there," said Kenny post-match.

"I feel that we were the better side and deserved to win it overall, but we contrived to lose it. We had enough chances to clear the ball in that period. Seán has knocked it out, he's gone to ground but he's knocked it out for a corner, but the referee's seen a penalty in it."

Alternatively, Rovers boss Bradley was adamant the official got the decision correct.

"You don't usually get penos in places like this in the last minute, but I've seen it back and it's a stonewall peno," Bradley told The Democrat. "It was a good decision by the referee, a brave decision and the right decision.

"Both sets of players were competitive and at each other, but that's what you expect when there's two good teams. I thought the referee has to be given a mention because it's a brave decision, even though it's the right decision. It's a brave decision to make and I thought he was excellent for both teams."