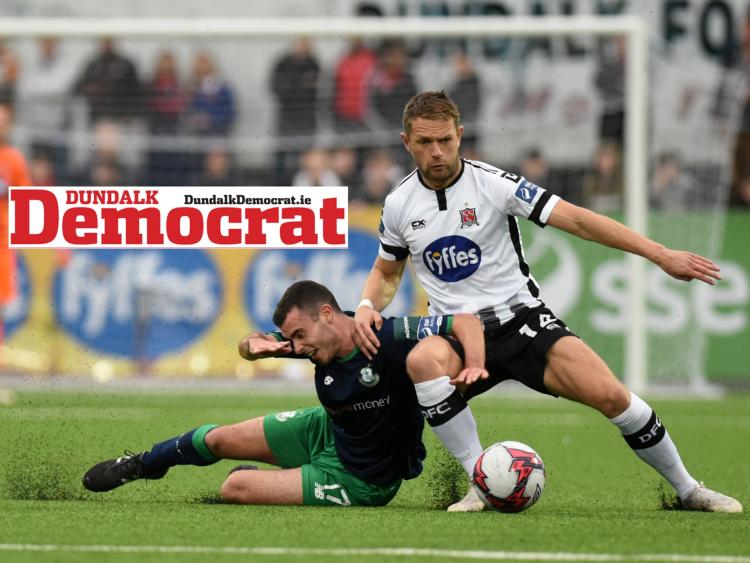 Dylan Watts chose Shamrock Rovers over Dundalk FC in the recent transfer window and his slippage from Stephen Kenny's grasp became all the more significant at Oriel Park tonight.

The 21-year-old's 90th-minute penalty conversion, after Seán Gannon fouled Ronan Finn, earned Rovers an incredible victory, bringing to an end the Lilywhites' 13-match league winning streak and seeing them miss the chance to go six points clear at the top of the league.

Compounding matters, match referee Robert Harvey, who was booed off at the end of both halves, red carded Dundalk defender Seán Hoare after the full-time whistle for his protests. A tetchy affair, most of the animosity shrouded Rovers' Greg Bolger's duels with Dundalk midfielders.

It had looked as if a winning goal was going to go Dundalk's way as they poured forward in the second half, especially after Michael Duffy had given the place lift off with an equaliser, to Roberto Lopes' early opener, nine minutes into the second half.

But the match took a cruel, and undeserving, twist as the title race remains wide open.

Having made seven changes to his starting XI from Friday's FAI Cup win over Finn Harps, with top-scorer Patrick Hoban and Duffy among those to return, the locals were hopeful of an early breakthrough.

And they got one, only it deservedly went the way of the Hoops as Lopes made the most of slack Dundalk defending by freely nodding Watts' inswinging free-kick to the net before the two-minute mark.

In fact, it took until the quarter hour before Stephen Kenny's charges took any sort of a grip on proceedings, Robbie Benson's mazy run through the heart of the visiting defence almost instantaneously reverting the tide.

Thereafter, the Lilywhites settled into a spell of dominance, without being overly creative. Dane Massey had their two clearest openings as set-piece deliveries simmered in Rovers' six-yard box. However, on both occasions, with the ball rocketing towards his feet and only Alan Mannus to beat, the left-back was unable to control, thus the opportunities went begging.

They would breach Mannus' cover on 54 minutes, though, when Duffy's drive flicked off Lopes' outstretched leg and looped over the despairing 'keeper.

Several goalmouth scrambles of an intense flavour unfolded as Dundalk attacked the town end in search of a winner.

On a breakout, Hoops substitute Gary Shaw almost got in on Gary Rogers, with last-ditch defending averting a disaster. At the other end, Ronan Murray headed narrowly over as the tension built.

And, then, injury-time carnage, and controversy...