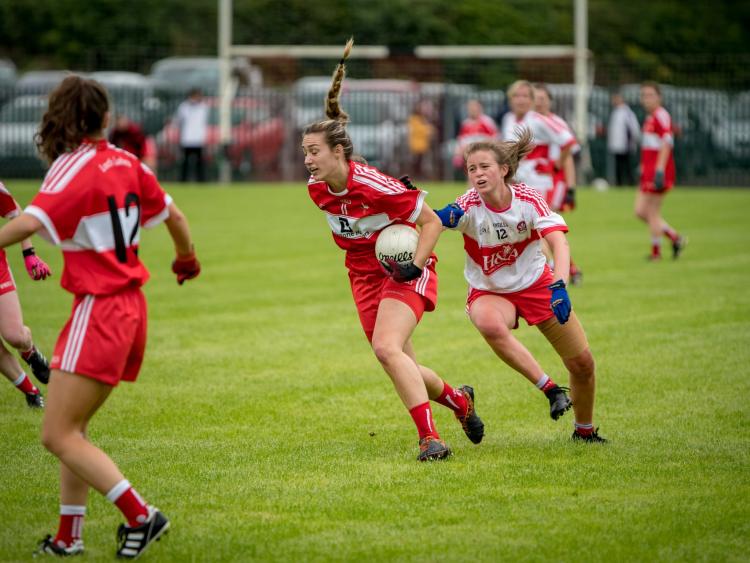 It would have been easy to get flustered as she bared down on goal in the dying embers of Sunday's All-Ireland JFC semi-final against Derry, but captain Kate Flood was coolness personified as she struck the major which sent Louth into the September showpiece.

The Wee County looked set for defeat on their return to the fray after Michelle McMahon's injury; however, they summoned a decisive attack which ended with Flood poking home from an acute angle.

A prominent soccer player too, the St. Patrick's woman credited her goal to her samba skills!

"I play a bit of soccer too so once I saw the chance to tip it past the keeper I knew I wasn’t going to miss," she told The Democrat.

"I’m just delighted that when the chance came that I was able to put it in the back of the net for the girls. We’ve worked so hard since November and we knew that we were only going to get one chance to go ahead and to win the game, and I’m just so happy to have been the one to do it for us."

Hard work pays off, is a term widely used in professional sport nowadays. However, Louth, and Flood, have a motto of their own.

"Hard work beats talent in any sport and we knew hard work was going to win the game today and that’s what we concentrated on. We didn’t start very well away to London, but grew into the game and got on top. We focused on working hard in training and that’s what we brought into today."

The break in play to treat McMahon's head injury refocused the Reds, who were on the edge of elimination beforehand.

Flood admits the stoppage gave them time to regroup and push on to secure a victory which she dedicates to the team's late manager, Mícheál McKeown.

"It (the break) kind of settled us. We were sort of all over the place in different stages of the game and coming back out we knew we were going to start at 100% and give it everything for the last six minutes. And what can I say, we’re on the road to Croker.

"We were touching on that the whole way through the year and before every game. We knew we had six minutes to empty the tanks and to make sure that his dream of getting to Croke Park was realised, and we’re going to do that."