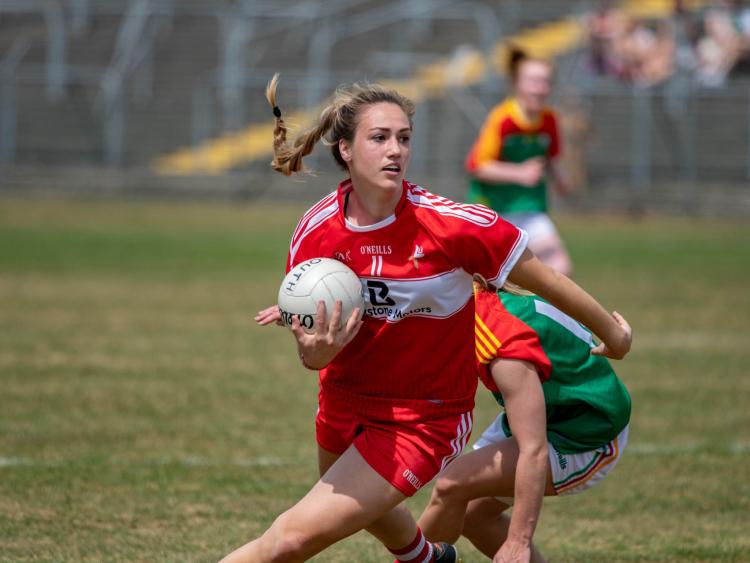 The semi-final will long stand out in the memory for the scenes at the game’s closing stages.

After Louth full-back Michelle McMahon went down following a collision with her own player, a long stoppage ensued, with both sets of players retreating to the dressing room as McMahon received treatment and awaited the arrival of an ambulance.

The match itself was in the melting pot with minutes of normal time remaining and Louth two points down. After returning to the field, Flood found the net with Louth’s first attack and they then hung on for a famous victory.

Slight favourites going into the game after defeating Derry earlier in the year in the league, Louth started the visibly more anxious side and Clarragh Connor settled Derry’s nerves with the opening score.

Doherty added another free before Katie Holly exploded into action with three unanswered points. The scoring blitz stretched their  lead to a deserved four as they piled pressure on the Louth defence.

But Louth were handed a lifeline when Derry goalkeeper Rachel Glasgow spilled a high centre from Bonnie Fleming to the net and, remarkably, Flood levelled the game with a free, 0-6 to 1-3.

Connor and Ciara McGurk responded with two fine points for the Oak Leaf ladies, but Louth dug deep again to stay in contention. Flood, growing into proceedings, found Boyle inside and the Cooley Kickhams poacher was brought down for a penalty, which Flood expertly converted to give Louth the lead for the first time.

There was still time, however, for Derry full-forward Megan Devine to leave it all square at half-time; 2-3 to 0-9.

Louth started the second half the brighter, Rebecca Carr, McGuinness and Niamh Rice opening up a three point lead.

Though Derry quickly wiped out the advantage with two quickfire goals midway through the half and at that stage looked very much in command. Connor got the first and Holly, the game’s outstanding player, surged in to get Derry’s second.

Then the unfortunate incident took place, which saw McMahon replaced, but Flood’s heroics set-up a repeat of the 2010 final. Louth face Limerick at Croke Park on Sunday week, September 16. Throw-in: 11:45am.