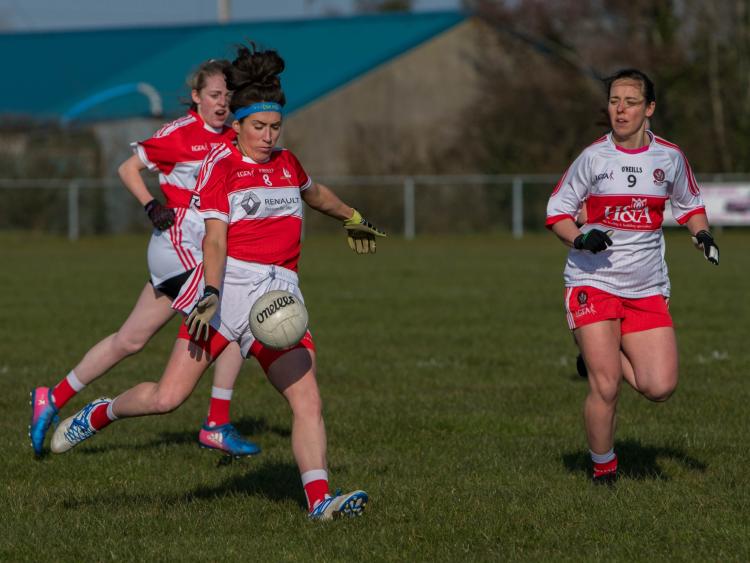 Louth are fancied to continue their excellent season by reaching the ladies All-Ireland Junior Football Championship final on Sunday afternoon.

The Wee County face Derry in Aughnacloy on Sunday (throw-in: 1pm) where a win would enter them into the September 16 decider against either London or Limerick.

Darren Bishop’s side are on a five-game winning streak going into the affair with the Oak Leafers, having claimed provincial honours before winning three from three in the group stages of the championship, most recently coming from behind to defeat London in Ruislip.

And while they overcame Derry in their only previous championship meeting, at this stage in 2010, reaching the Croke Park showpiece as a result, Louth will be all too wary of the danger posed by Paul Crozier’s charges, who lost last season’s junior final to Fermanagh after a replay. This having led the drawn match by nine points.

“Over the next few weeks we will get the players recovered as they have had a very busy few weeks with club and county and we will be solely focusing on our preparations for one of the biggest days of this young team’s year,” the Louth boss said after the triumph against the Exiles.

The sides met in the National League in February, with Louth running out 3-13 to 1-9 victors. Reds captain Kate Flood was in fine form that afternoon, shooting 1-4 of her team’s total. She was also a strong performer in their championship meeting eight years ago, converting two goals in a 3-10 to 2-10 victory in Emyvale.

‘Keeper Una Pearson and defender Michelle McMahon were others who featured in that 2010 victory. However, while that Dermot Agnew managed side, and the Wee County team who got across the title line five years later, was brimming with experienced players, the current outfit includes plenty of youth.

Nonetheless, teenage Cooley Kickhams star Lauren Boyle has been in tremendous form, scoring 4-17 in her last three matches, including firing 3-7 in the opener against Antrim. She’s likely to be a marked woman this weekend; however, Louth have plenty of attacking talents alongside her in Alanna Conlon, Niamh Rice and Flood, while Aoife Russell has been a revelation in the Reds’ half-forward line this campaign.

Adding to this Jenni McGuinness’ return after several seasons off the panel and Bonnie Fleming’s addition and Louth look to have too much firepower for a Derry side who progressed from their three-team group in second place.

Rebecca Carr featured off the bench in London and if she finds full fitness, Bishop and his management team will have an even more difficult selection quandary as the current midfield pairing of Sineád Woods and Eimear Byrne have come up trumps in the All-Ireland series to date.

In Derry’s ranks, ex-Tipperary star Caith Glass and Anna Morrison are among the grade’s best defenders, while Katie Holly, whose brother, Niall, lined out with Derry in the Ulster Championship, is a key threat. Another of the Northerners’ major attackers is Deirbhlle McNicholl, daughter of Dermot, an All-Ireland winner with the Oak Leaders in 1993.

Amy McGuckin provided Derry’s main source of resistance in the league encounter earlier in the year. She is certainly another one that Louth will have to watch.

However, regardless of her input, the Reds are on a roll at the moment and a Croker date looms large!