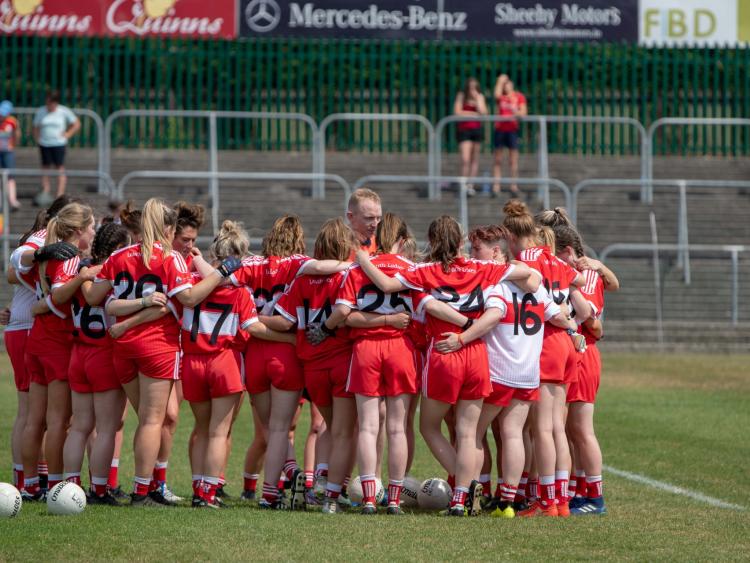 “Absolutely, (I’m) very nervous. This is one of the biggest games I’ve ever played in and to be only one step from Croke Park is such an amazing thing to think about. We’re just trying to get over the game this weekend…”

Standing one step from Croke Park was a stance Bonnie Fleming certainly didn’t think she would be taking, at this stage anyhow.

A Monaghan native, she transferred into Geraldines at the beginning of last year having spent a decade in England, firstly studying in Liverpool before working in London.

“We moved back, my other half works in Dublin, in Ballsbridge, so he kind of wanted somewhere halfway (between Dublin and Monaghan) so we decided Louth was halfway for both of us for work,” she says of their current arrangement, which has them living in Blackrock.

The job she refers to is her PE and computers teaching position at St. Louis’ in Monaghan.

Before her move across the water, Bonnie was part of an Ulster Championship-winning Farney side, in the mid-noughties. And so, upon her return, she signed back with Monaghan Harps, only to take the decision that, for social and practical reasons, playing in Louth was a more sensible arrangement.

A few games into her career with the Haggardstown outfit, last year’s county management began to take an interest, but disaster struck in the form of a career-threatening injury

“We were playing a league game against the Mochta’s last May and I was just going for the ball. I don’t know if I was tackled, but I was over near the sideline and I tore my ACL. I had to have that repaired last July.”

She adds: “When it happens and you hear ACL, you don’t think good things and at my age as well, I suppose I thought that was kind of the end of me, but I want to decide myself when I finish so I put a lot of work into it.

“I didn’t think I’d be able to come back and play club never mind playing county.”

Recover she did. Her first game back for the Gers came in early June and by the end of the month she played 60 minutes for the first time in over a year.

Then came a second call from Louth, and she took it.

“You kind of feel like you’re a bit of a blow-in at the start because all the girls have been working so hard since the beginning of the year and it sort of seems like you’re invading, but they’re such a lovely bunch who make you settle right in.

“It’s just been a real privilege to be asked up and to play.”

Bonnie would have been at HQ last Sunday week for her native county’s All-Ireland semi-final with Tyrone had she not been in the heat of battle with Louth in London - a match where she struck two points in a 1-17 to 2-11 win.

However, in hindsight, maybe that was best as she bids to help Louth into a fourth All-Ireland junior final in eight years.

And if she does, it would be a dream come true…

“Like a lot of others growing up, you went to the games in Croke Park and took flasks and sandwiches and you ate out of the boot and went into the games, Monaghan games. It was a real big deal and the thought of me being able to play there (at Croke Park) is kind of a dream. I never thought I’d get the chance so it’s very exciting to be so near.

“There’s nothing like the feeling of winning. We’ll give it everything that we’ve got.”