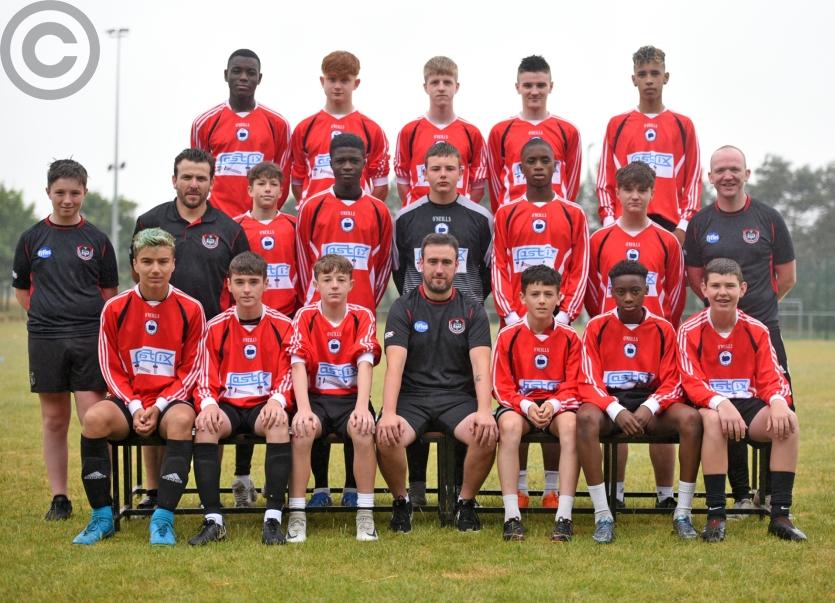 The Dundalk Schoolboys League U15 team that competed at the SuperCup NI this week. (Pic: Ciarán Culligan)

The Dundalk Schoolboys League team finished seventh at the SuperCupNI (Milk Cup), but to define their performance by their ranking would only tell some part of the story.

The Martin Dullaghan-managed side missed out on a place in the top tier semi-final by one goal, having finished level on seven points with Co. Armagh in the group.

Dundalk opened their account last Monday with a 2-0 win over Chilean outfit Colina. Bellurgan United’s Ryan O’Kane scored both goals, with the second coming from the penalty spot.

They faced Armagh on Tuesday and after a scoreless first half, Shamrocks’ Dara Akinade put Dundalk in front. That looked set to be enough to send them clear at the top of the standings. However, an injury time equaliser meant their fate came down to the final match with Leeds United, on Wednesday.

By kick-off, the Lilywhites knew what they had to do following Armagh’s 2-0 victory over Colina earlier in the day. A three-goal victory was required and the Lilywhites quickly set about their task as O’Kane opened the scoring on 16 minutes from the penalty spot.

However, two of the game’s next three goals either side of the interval would go to Leeds as Louis McKeown’s goal, which had put Dundalk 2-1 ahead, was cancelled out. The local boys were also indebted to ‘keeper Thomas Mulligan for producing a fine penalty save to maintain their Milk Cup dreams.

A winner came via Benus Luko, but, agonisingly, it wasn’t enough as Armagh cleared them at the group’s summit on score difference.

Still, with the Globe to play for, Dundalk faced Co. Derry on Thursday in the semi-final. Rock Celtic’s Niall Lennon put the Lilywhites in front with a well-taken free-kick before Derry hit back with an equaliser prior to half-time.

The match finished with no further goals, meaning the contest would be decided on spot-kicks where, unfortunately, the boys from the North prevailed, 5-4.

But, undeterred, Dundalk returned on Friday to seal seventh place courtesy of a 1-0 win over Cherry Orchard - Callum McGee scoring the only goal in the early stages of the second half.

Their performance, well, both players and management can be very proud. They represented the Schoolboys League superbly.