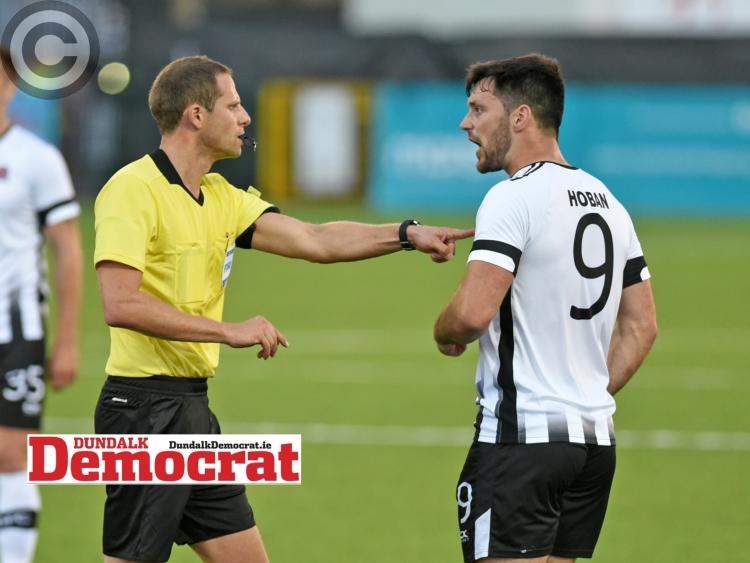 Patrick Hoban claims he was spat at by Larnaca’s Larena Jorge in tonight’s Europa League qualifier at Oriel Park.

The striker saw a free awarded against him for a collision with visiting ‘keeper Tono Ramirez in the latter stages of the encounter; the spitting incident is believed to have taken place as rival players clashed in the aftermath.

Hoban tried to inform referee Harald Lechner of the occurrence. However, the Austrian official deemed the Galwegian to be remonstrating overly and bizarrely booked him before brandishing a red card to the astonishment of the 3,000 inside the ground.

Having realised his mistake, he recalled Hoban to the field, but a sour taste remained for Dundalk’s No. 9.

“The goalie went down after a challenge from me and they all came around me; I was standing up for myself and their number seven spat on my arm, and that’s why I reacted,” he told The Dundalk Democrat.

“I went over to the referee to tell him; I told him twice and he pulled me over and gives me a yellow and a red.

“At the time, I didn’t know what was going on. Even to get yellow was a bit much.”

It capped a frustrating night for Hoban, who had a stray elbow flung his way in an off the ball incident earlier in the match.

“It’s mixed emotions tonight. Personally, I didn’t feel that I played well, but I worked hard. I felt that I wasn’t even allowed challenge for a ball, every time I went up it was a free.

“I think we can do a lot better, it’s a pity we didn’t get the goal that we needed, but it’s still all to play for over there.”