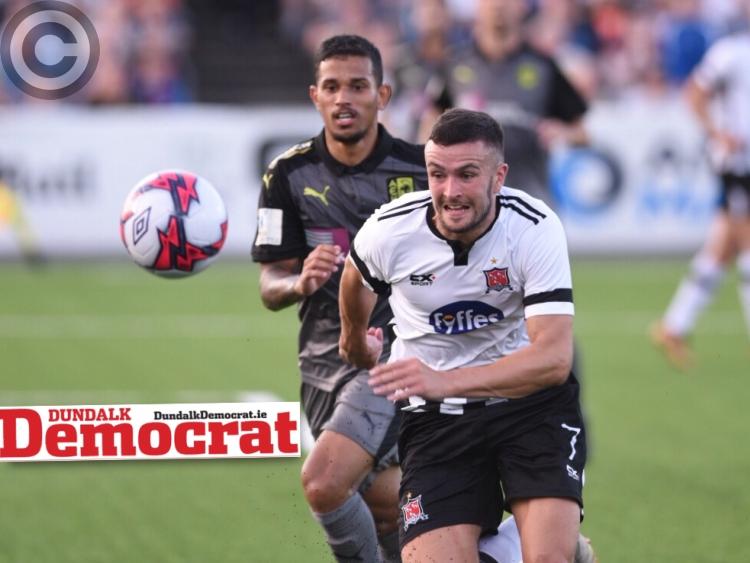 Dundalk FC will travel to Cyprus for the second leg of their Europa League qualifier with their destiny in hand following tonight's scoreless draw with AEK Larnaca at Oriel Park.

The result gives the Lilywhites a huge opportunity of booking their place in round three ahead of next week's return leg in Larnaca, especially when you consider Dundalk have scored in 10 of their 11 European away fixtures under Stephen Kenny's stewardship.

Having made just the one enforced change to the side that defeated Levadia Tallinn on the Carrick Road seven days earlier, with Daniel Cleary coming in for the injured Seán Gannon, the hosts, roared on by a partisan home following, made a bright start and almost took the lead in the ninth minute.

Michael Duffy went on one of his trademark mazy runs from halfway, reaching the edge of the area as Larnaca defenders back-tracked furiously, before clipping the ball goalward. But, as Oriel Park stood still, his effort went inches by the post.

It was the clearest-cut opening of the fixture, though it took a tremendous sliding tackle from Seán Hoare to deny Joan Tomas' slick attempt at goal midway through the opening half.

Match referee Harald Lechner failed to impress the home congregation with his pernickety and sometimes inconsistent officiating. And it was from a free awarding in the early stages of the second half that the visitors almost took the lead when a deep delivery was knocked back across the area for Apostolos Giannou by Joan Truyols. However, the Australian's connection was weak and allowed Gary Rogers to smother the effort.

The Cypriots were more dominant after the restart and spurned a second major opening when Acorán blazed wide of the mark from a free shot.

Most of the drama unfolded in the final half-hour. The referee's opting to caution and then dismiss Patrick Hoban had the Lilywhites apoplectic. The whistler, realising that he hadn’t previously yellow carded the Dundalk striker, called Hoban back into play but was still booed off the pitch at full-time.

It began a crazy finish to the encounter where Duffy and Hoban had efforts saved, ensuring the tie remains on a knife-edge ahead of next Thursday's second leg.