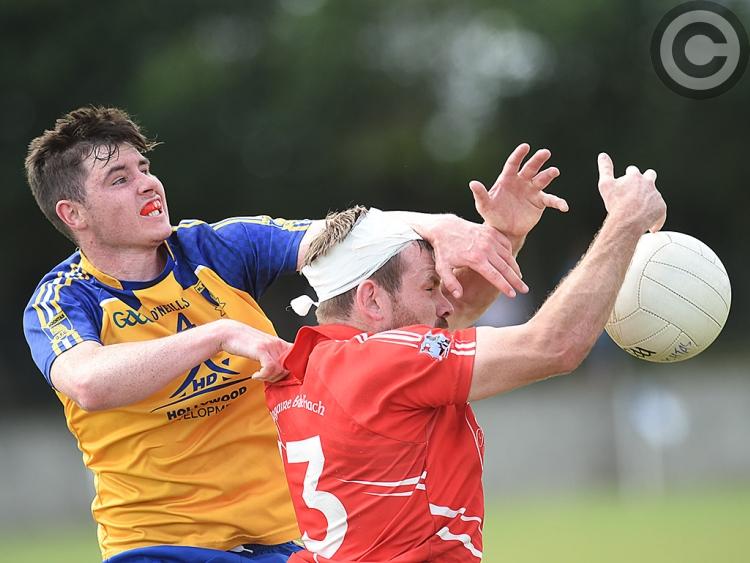 Declan Byrne was the star man for St. Mochta’s in Ardee on Sunday afternoon as the Louth Village side ran out deserving winners to condemn Hunterstown to a relegation play-off.

The inter-county player shone throughout, hitting 1-4, as he caused the Rovers backs a whole host of problems. Hunterstown couldn’t cope with his fine display and relying heavily on Ryan Burns’ kicking from frees for many of their scores, they failed to worry Seamus McGahon’s impressive side.

It is 37 years since the Mochta’s last tasted Seamus Flood success and while they are not fancied to replicate that win in 2018, they will be confident of giving St. Bride’s a game in next month’s last eight clash.

Hunterstown, with Mark Brennan starting in the full-forward line, started fast with Burns hitting over from play and then twice from frees after Paul Carrie put over.

Stephen McCooey’s early leveller had at least got the Mochta’s off the mark early and against a slow and lethargic Rovers, they soon assumed control. In the last 20 minutes of the half, they outscored their rivals 1-7 to 0-3.

Cutting through Hunterstown with ease, they established a lead before two Burns frees stopped the rot. However, a poor kick-out conceded possession to Barry Mulholland and he laid on for Byrne to find the net.

Rovers cut a three point deficit to one after the restart, but another Mochta’s goal put daylight between the teams. McCooey powered past several defenders and slammed beyond Niall Carrie.

Alan Landy, Glen Mathews and Brendan Lennon responded, but every time Jim Matthews’ team got within touching distance of the lead, the Mochta’s pulled away.

Byrne, Gerry Garland and Gareth O’Reilly pointed to retain the cushion before Lennon and Burns notched, and then Paul Carrie and Conor Mathews had efforts blocked late on.

Rovers needed two goals at that point to secure progression. After a fine start to the campaign, they have now lost five of their last six in league and championship.