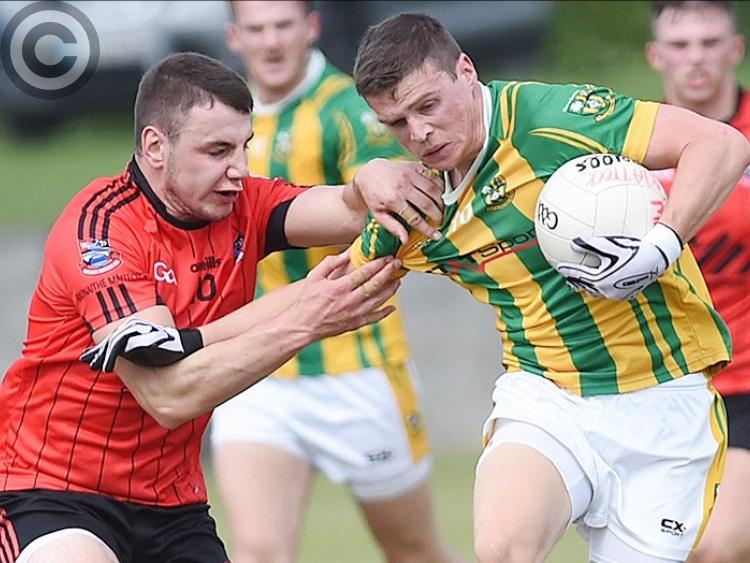 Clan na Gael crashed out of the Intermediate Football Championship in Ardee on Sunday afternoon – and now must face a relegation play-off to save their season.

Ciarán O’Connor’s penalty six minutes into injury-time left the narrowest of margins between the teams at the final whistle, but after defeat to St. Bride’s two weeks ago, a draw was of no use and the Clans needed another goal to progress.

A late rally – which saw the Clans outscore the men from Collon – wasn’t enough to rescue their championship campaign. Brendan Leacy’s goal helped Mattock over the line, as did late scores from veteran David Reid and teenage sub JP Watters.

It is eight years since the last of Rangers’ two-in-a-row senior championship triumphs and they now stand just three games away from returning to the top tier of competition in 2019. Where the Clans will play their football next summer now depends on the outcome of their play-off.

The latter had to be replaced and later re-appeared with his shoulder in a sling. The stop in play halted the momentum somewhat and through Leo Martin and Mark McGeown, Clans got on the scoresheet.

The side in black and red roared back however, with Niall McKeown, Ronan Kilbane and then O’Brien putting over to established a five point lead. Martin produced the game’s standout score before the Dundalk side nabbed the game’s opening goal.

Mark Newell’s clever ball over the top found Billy Smith in a familiar position and he powered the ball to the net.

James Caraher and Kilbane pointed either side of a Newell effort as Mattock kept their noses in front, but could have gone in behind at the break. Moments after entering the fray, O’Connor bore down on goal and forced Mike Englishby to produce the save of the weekend, if not the championship, to deny him.

Just as in the first half, Mattock had four points on the board before their opponents had one after the restart. Reid’s fine score was swiftly followed by a goal from Clarke. Denied first by the Clans stopper, he kept his cool the second time around.

Five of the next six scores were to the Clans which kept them in touch. Their manager, Mark McCann, owed much of that to the prolific free-kicking of Robbie Curran. But it counted for little as Mattock hit the net again.