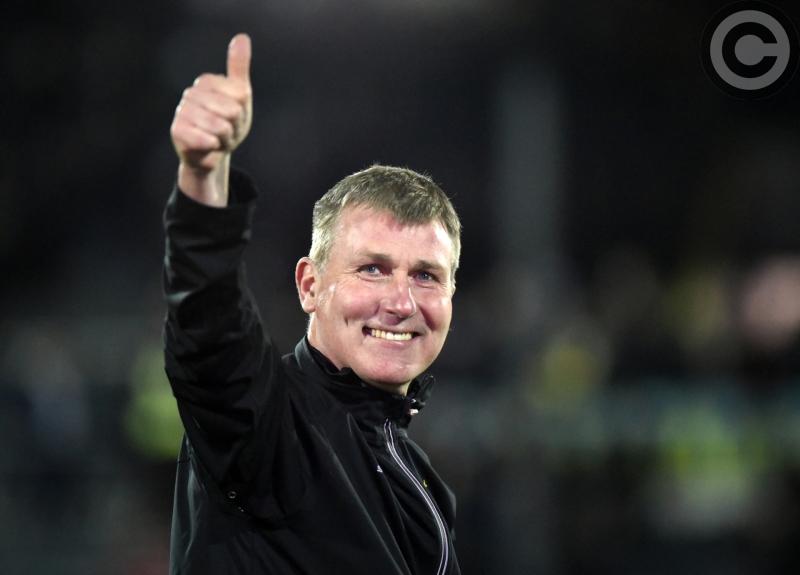 Dundalk FC returned to the top of the Premier Division table with a 4-1 victory over Derry City at the Brandywell Stadium tonight.

Having fallen behind to Darren Cole's fantastic opener, the Lilywhites rallied with goals from Brian Gartland and Robbie Benson coming before Michael Duffy and Krisztián Adorján extended the lead after the break. In what was their maiden visit to the re-developed Foyleside venue, Dundalk condemned Kenny Shiels' side to their first home loss of the season.

Following the dramatic late victory over Sligo Rovers on Friday night, Dundalk manager Stephen Kenny made three changes to his starting line-up with Georgie Poynton, Dane Massey and Jamie McGrath getting the nod ahead of Stephen Folan, Dean Jarvis and Ronan Murray.

During a lively opening-half, Derry held the advantage early on when Cole diverted past Gary Rogers. Though, the awarding of a corner in the build-up had the visiting players far from pleased.

Dundalk rallied though and Gartland put them on level terms from close range before Derry striker Rory Patterson saw a goal chalked off as the hosts sought to swiftly regain their advantage.

But, instead, 12 minutes before the break, the turnaround was complete when Benson calmly rounded Ger Doherty and slotted to the net.

And Derry-native Duffy all but secured the spoils for the Lilywhites in the early minutes of the second-half when he finished tidily past Doherty.

Patrick Hoban - the league's leading scorer - had the ball in the net late on as Dundalk chased a fourth, though the assistant's flag saw the goal ruled out.

A fourth goal would arrive in added-time, however, when substitutes Marco Tagbajumi and Adorján combined with the latter dispatching to the net - his first notch for the club.

Next up for the league leaders is a trip to Dalymount Park on Friday night to face Bohemians.