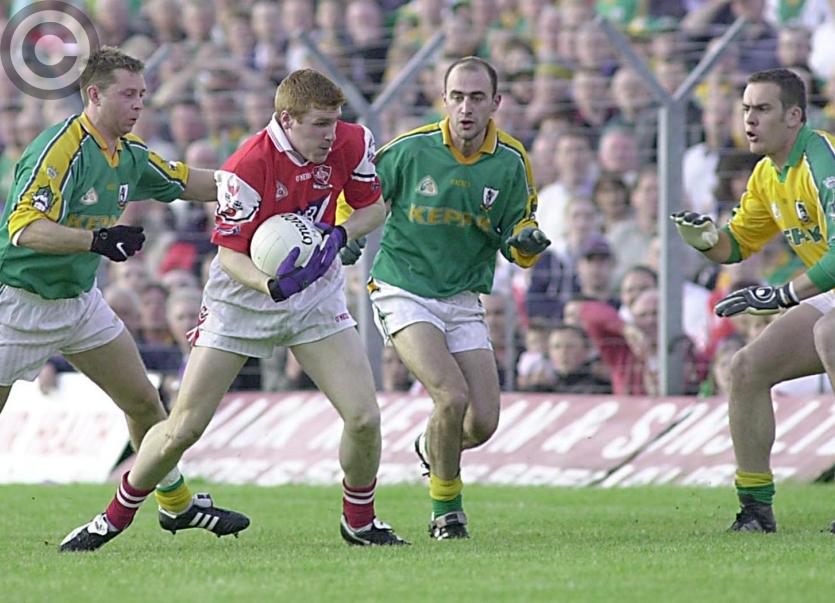 The look on Charlie McAllister's face said it all. Though it had been almost a half an hour since Brendan Gorman had brought an end to Saturday evening's dramatic Bank of Ireland All-Ireland qualifier second round match at Navan, the man who has given so much to Louth football over the years had eyes that were still raw from the tears they had shed.

However, typical of the greatest of Gaels the county has known, it wasn't his own feelings he was concerned with, rather those of the players he tends to so well in his role as kit manager. "They're inside and I'm not coddin' you, they're devastated," he said.

Yes, Charlie, and so, too, are the team management, and the supporters, and quite probably those at home who had listened to the game on the radio, though, not having been there to witness it firsthand, the people who weren't at Páirc Tailteann couldn't really appreciate, first of all, the magnificence of the Louth performance, the ineptitude of the referee's handling of the game, and above all, the sheer audacity of how Meath picked Louth's pocket for a win that brings the Royals that one step closer to contesting a third All-Ireland final in four years.

There have been many Louth heart-breakers over the years. No point in going back to the All-Ireland final of 1950; the number who'd have been there to witness Mick Flanagan's late winner for Mayo has thinned so much it's really not worth devoting any space to.

But there would be lots around who'd have been at Drogheda in 1978 to witness a Frank Lynch-coached side bring a star-studded Kerry side - Jack O'Shea, Seán Walsh, Eoin Liston, et al - to the wire in an All-Ireland semi-final U21. After that, there was a close scrape with Dublin in the Leinster SFC semi-final of 1991.

John Osborne's point, ten minutes from time, put Louth four ahead, but Dublin, having taken the Reds' trump card, Seamus O'Hanlon, out of it, somehow clawed their way back for a most unlikely win.

Then there was four years ago in a game with Meath at Croke Park. Brian White, the Wexford official, committed the referee's cardinal error - he changed his decision. The result was a point for Meath, and in the wind-up, that's all that was between the sides, one point. All very painful for Louth supporters, but mere pin-pricks when compared with what unfolded at Navan on Saturday evening last.

Call it what you will - a sickener, highway robbery, an injustice. Louth were by far the better team on an evening where over 20,000 gathered at Páirc Tailteann, and when Paddy Carr's men led by four points with seventy minutes played, there were visions of a 27-year drought coming to an end.

By then, Armagh referee, Brendan Gorman, had made the costliest of blunders, leading to a Meath goal. Why, ten minutes into the second half, he chose to throw up the ball after awarding a free to JP Rooney is a question only he can answer.

Rooney was fouled along the sideline and was rightly awarded a free. The Louth corner-forward became entangled with the Meath player who had fouled him, nothing more. It was at worst, six of one and half-dozen of another. But Mr. Gorman didn't see it that way. As far as he was concerned, Rooney had retaliated, and instead of awarding Louth the free, he threw up the ball.

Meath won possession and immediately the ball was switched towards the Louth goal. Richie Kealy grabbed hold of it, and left with only Stuart Reynolds to beat, was never likely to miss.

Minutes later, Meath goalie, Cormac Sullivan, made a save, and after clearing the ball threw a punch that was so wide of the mark, the only hope he has of ever seeing inside the National Stadium is if he pays in. But the intent was there, and if he'd been consistent, referee Gorman would have penalised the 'keeper. But, no.

It wouldn't have been so bad had it all ended at that. But it didn't.

Having conceded a second goal, in the 70th minute, Louth backs were put under fierce pressure, defending a one-point lead. Meath raided on the right, but were frustrated by a number of timely tackles, and with a series of neat passes, Louth worked the ball to around the 45-metre mark.

The referee, however, spotted a Meath player committing a foul close to the corner-flag. He stopped play, went back, booked the player, and awarded a free from where the infringement occurred. That's what incompetent referees do; those who know the job allow play to continue, and when the ball goes dead, go back and take the necessary action.

Coming towards the end of the seventy minutes, the man on the tannoy said there would be "at least three minutes" of stoppage time to be played. When Graham Geraghty rifled the ball to the net, giving Meath a 3-8 to 2-9 lead, almost four minutes had been clocked up. When Stuart Reynolds re-started the play with a kick-out, Mr. Gorman called a halt.

We say it on the front page of this paper. "The rich get richer and the poor get poorer". When a county belongs to the lower reaches, it's denied the breaks. By the same token, if you belong to the elite, as Meath do, anything goes.

Four years ago, a Meath player whinged when Brian White mistakenly awarded a free to Louth and was successful in getting him to change his decision. On Saturday evening, the same player remonstrated with the referee at half-time, unhappy, maybe, over some of the first half decisions.

It's unlikely the Meath player's name will appear in the referee's report. But, consider, if you will, one of the lesser-known Louth players - or any Louth player, for that matter - doing the same. It would be hard to imagine his name not making it into the book.

Louth were robbed on Saturday, in the cruellest fashion. The goals that gave Meath the luckiest win they've had in years were scored in time added on, but worse than that, in their pursuit of nothing more than a fair crack of the whip, Louth were denied.

Never before, in this writer's long-life of following Louth teams, beginning, ironically enough, with the 1953 Leinster championship semi-final meeting with Meath, has there been a championship defeat that has had such a profound effect on supporters. Many wept uncontrollably, while others, through sheer frustration, wanted to fight.

Maybe it mightn't have been so bad had it been any team other than Meath who made it into the winners' enclosure. Those supporters who wear the Kepak shirts aren't bad losers. Just how bad was illustrated on Saturday. With Louth showing four points in front with normal time up, hundreds were seen streaming towards the exits. On hearing the result afterwards in the pubs, they probably joined the chorus, "You'll never beat the Royals".

The Louth performance, overall? It was terrific, the best turned in by the team schooled by Paddy Carr in the five championship matches played this season. The game was taken to the raging hot favourites from the very start, and on only two occasions - the first, very early on - did the lead belong to Meath. Regrettably, the second occasion was when it mattered most, just seconds before the final whistle was sounded.

The support play was excellent, from the full-back line up to those operating right in front of Cormac Sullivan's goals, and when there was a vital need for scores, they were usually provided.

If the TV cameraman got a good hold on JP Rooney's goal then it will have to be in line for the score of the championship, as much for its creation as it's execution. Christy Grimes' pass was terrific, and while we were willing him to box the ball over the bar, Rooney had the confidence to seek out a gap between Sullivan and his near post.

There are other aspects from which supporters can take some solace - but at the end of the day, Louth lost. That, however, is an outcome with which those who come down on the side of fair play couldn't be happy.