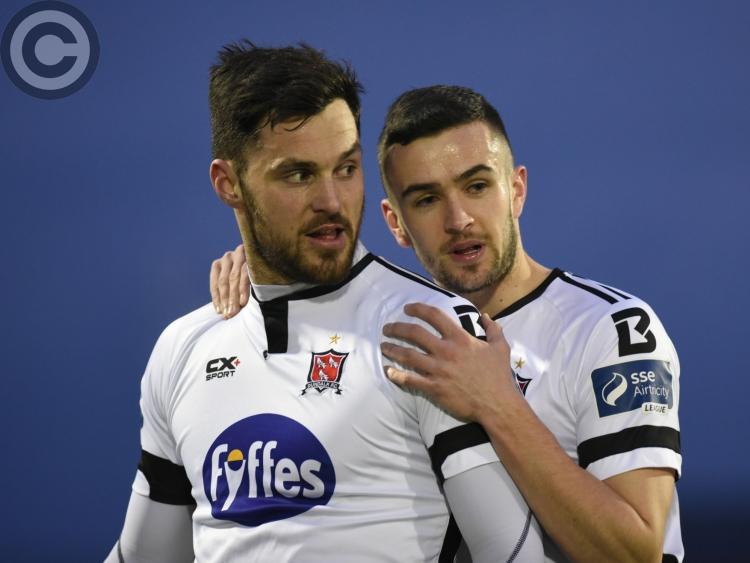 It was a very 'Good Friday' night at Oriel Park as Dundalk FC cruised to a fifth league win of the season with victory over Bohemians.

Just as he did six days previously, Patrick Hoban opened the scoring - from the penalty spot - before right back Seán Gannon doubled the lead before the break with his first goal of the season.

Thereafter, the result was a foregone conclusion and, despite the Gypsies making a better fist of proceedings in the second half, The Lilywhites remained the more threatening; and Man of the Match, Michael Duffy, closed the match in style by firing home goal number three.

Down Seán Hoare and Ronan Murray, neither of whom were even fit to make the bench, through injury, Stephen Kenny may now also have to contend with the absence of his first choice between the sticks, Gary Rogers, after the custodian limped off just nine minutes in. Seeking to equal a club record of eight successive clean sheets, the Meath man sustained a suspected calf injury when clearing his lines.

Gannon doubled the advantage just seven minutes later, finishing beneath Supple after Jamie McGrath had cleverly played him down the right-hand side.

And the chances kept coming with the electric Duffy having the best of them, stinging the hands of Supple after showing the Bohs defence a clean pair of heels.

After the break, Adorján - on for his first league start for the club - went closest to extending the lead when his powerful effort was palmed away by Supple to his left.

Though never looking like conceding, Dundalk were perhaps fortunate not to have seen a penalty awarded against them as the ball flicked off Robbie Benson's hand in the area, but, despite Bohs' claims, referee Graham Kelly waved play ahead. The Dubliners had further claims dismissed later in the half as their manager, Keith Long, cut an apoplectic figure along the touchline.

Nonetheless, the hosts made it 3-0 when Duffy turned sharply on the edge of the area and shot home to round off an excellent all-round performance.

Next up, Dundalk make the first defence of their EA Sports Cup crown at St. Patrick's Athletic on Monday before Shamrock Rovers visit in the league in seven days time.