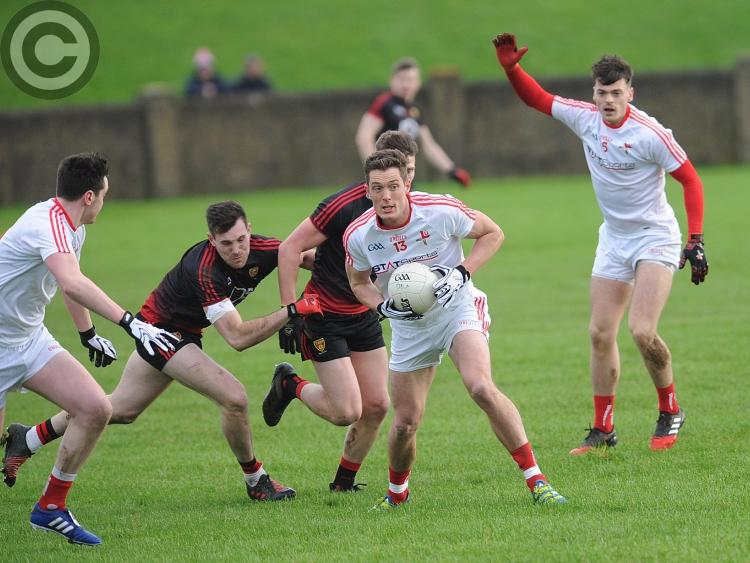 Louth's Declan Byrne in possession against Down on Sunday. (Pic: Arthur Kinahan)

It is early days, but the overwhelming feeling is that it's going to be a long nine-weeks before Louth senior footballers complete their National League Division Two campaign, and after the last game has been played there'll be nothing much to celebrate.

Sunday's tie with Down at Drogheda was the opener. Having shown with a chance at a few stages, the Reds, playing their first serious match under Pete McGrath's charge, completed the seventy-minutes with a six-point deficit, 1-14 to 0-11, beaten by a team that had been tipped for a mid-table finishing position, at best, in most of the pre-competition predictions.

Maybe the Mournemen will do better than expected, but for the road ahead can't be anything but difficult. Sunday's was the first of three home games; next up, on this coming Saturday, is the first of four visits to an away venue, Cavan's Breffni Park.

Louth had a strong contender for man-of-the-match in the all-action and hard-working Bevan Duffy, and Andy McDonnell and Tommy Durnin more than held their own at midfield; but missing was a forward to match Down No 14, Connaire Harrison. Had it been otherwise, there would have been a lot more than eleven-points on the scoreboard, and the result might just have been different.

Harrison caught the eye in last year's championship, particularly in the matches with Armagh and Monaghan. Pete McGrath knew of the problems he might and had a couple of players assigned to keeping the Glasdrumman in check.

It's a ploy that might have worked in the first-half; but when Down badly needed scores to call a halt to a last-quarter run that looked as if it might get Louth back in contention, Harrison made himself available.

Two-points in quick succession, one of them gift-wrapped by Louth goalie, Craig Lynch, made it 0-13 to 0-9, and when he added a goal a few minutes later, the biggest of the Gaelic Grounds' grassy banks lost many of its denizens.

that win matches, and as he plans for the games ahead, McGrath will have to find a  reliable sharpshooter or two, complimenting William Woods, who, while most of his six-points on Sunday came from frees, caused the Down most bother.

Louth had fourteen players in their own half at one stage of the first-half, and when in an attacking position in the second-half, one of their turned and played it back to a defender.