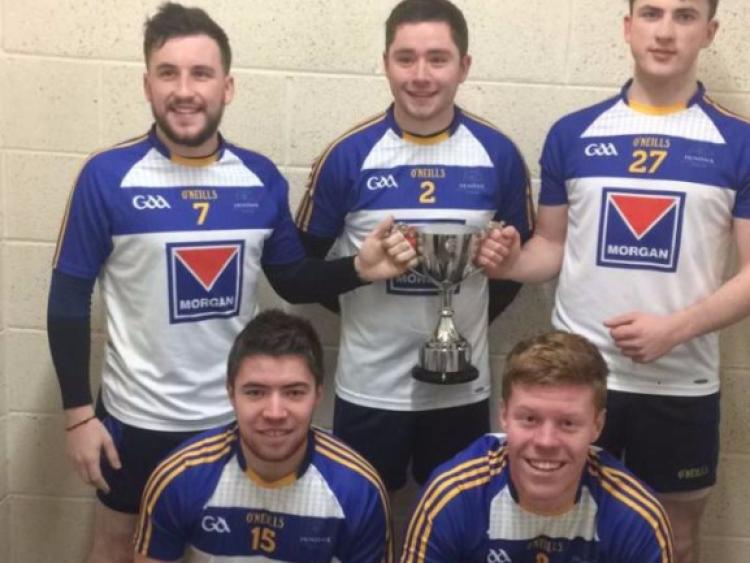 DkIT players with the league trophy.

The Dundalk college were on top in the first-half and led by three-points at half-time; 0-9 to six-points. However, it was in the second-period where Craig Lynch's team pulled away to win by a comfortable margin with captain Alan McCahey top-scoring with 1-7.

A tense opening quarter saw the teams grow into affairs before DkIT began to exert their superiority with their strong forward running causing the Galway-Mayo outfit more and more problems as the half wore on. McCahey was the winners' main source of scores in the first-half.

The match was effectively ended as a contest shortly after half-time when a flurry of goals - similar to their scoring burst against Jack O'Connor's Kerry College of Further Education in the semi-final - turned the tide firmly in DkIT's favour. Subsitute, Cullyhanna's Shea Hoey rattled the back of the net almost immediately and straight from the resultant kick-out, Seamus McNally rose to collect before setting his side on the attack. The move was ultimately ended when captain McCahey squeezed a shot beneath the opposing 'keeper for DkIT's second major.

A sending off for GMIT made their task an even greater one and thereafter the victors rampaged clear with Ian Connor scoring their third goal. DkIT stalwarts Aaron Byrne and Jonny Donohoe - making his 50th appearance for the college - were introduced and the latter put icing on the cake, turning his man sweetly and hammering to the top-corner with his left foot. It rounded off a very impressive performance, and indeed league campaign for DkIT.