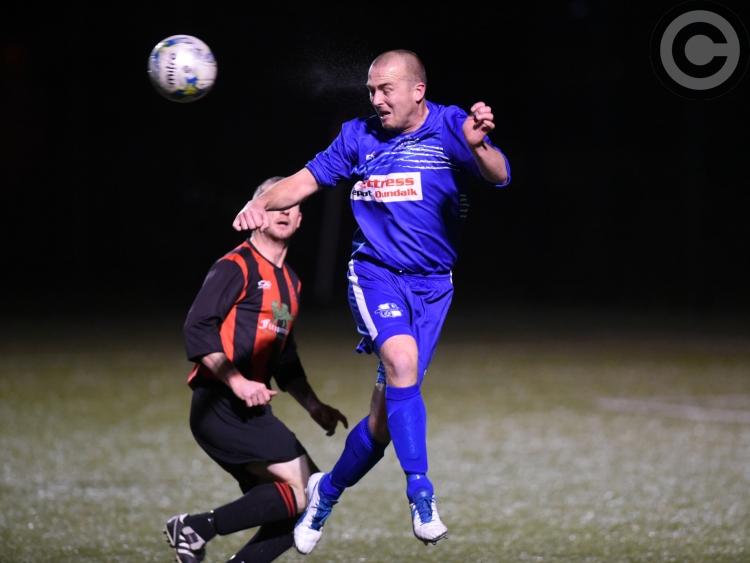 Muirhevna Mor picked up their third win on the bounce with a comfortable 3-0 win over Duleek on Friday night.

Micky O'Kane (2) and Billy Smith found the target for the Blues who go third in the table, and ahead of town-rivals Quay Celtic, courtesy of their fourth win of the league season.

Despite getting off to a slow start where a quickly taken free-kick saw Duleek rattle the crossbar, the champions settled into their groove and O'Kane put them in front, dispatching to the net after Smith had done well to escape Duleek challengers down the left-hand side.

And the same player doubled the Mor's lead with a tidy finish before half-time.

Having lined-up with three in midfield - Colin Hoey, Thomas McShane and Conor Gorman - the hosts controlled large parts of the match with McShane particularly good in terms of defending his back four from Duleek's advances. While, on the occasions that the Meath side broke through, Michael Cooney was in no mood to concede as he saved two one-on-one efforts, one in either half.

Smith rounded off a comprehensive evening's work for Muirhevna Mor, racing clear towards the finish and rifling to the net.

Coincidentally, the Blues now have more points at this stage of the season than they had at the same juncture last year as they went on to claim the NEFL Premier Division crown.