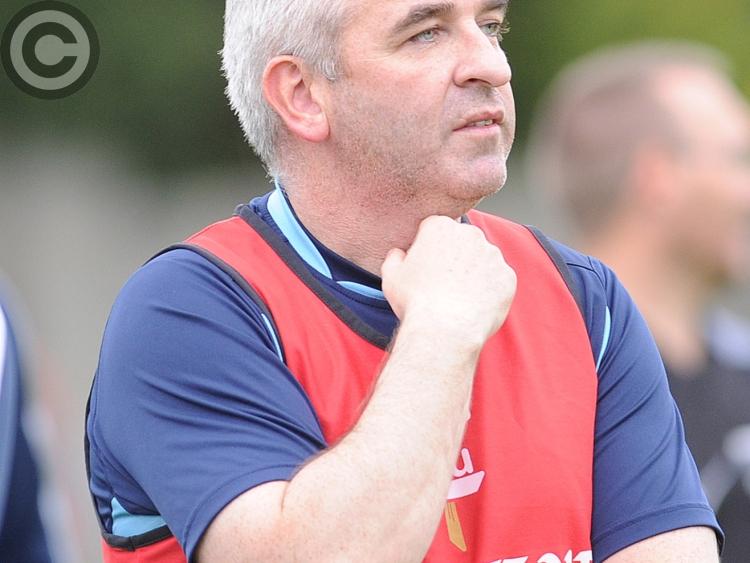 The fashionable route for many clubs nowadays is to look for an outside manager, when choosing homegrown could pay the best dividend.

Newtown Blues manager Ronan Phillips is the pertinent example of choosing homegrown. In his maiden season in charge of his native club, Phillips has brought the aristocrats of Louth football to their first senior decider since 2013.

For the past three seasons, they have gone outside the Newfoundwell pale for a manager with Cathal O’Hanlon and Kieran Quinn achieving little in the way of success.

“There are other ways of looking at that too. I could be getting rewarded for their work as well and we have been in the last three minor finals. There is a lot to do with timing involved with it too,” Philips told the Dundalk Democrat when this was put to him.

“The players that have been in those minor finals were coming through and just maturing, they’re only going to get better too.

We were basically trying to mix the two groups together, the old and the new and it took a while, but in this moment in time it seems to be working,” he added.

Philips long aspired to taking the reins of the 20-time winners. A distinguished forward in his own playing days, as Philips explains, his took an alternative route to the ‘big gig’.

“I retired early and got involved with the Blues girls team, managing them and then I ended up coaching the Louth ladies and I really enjoyed it,” he said.

“Then it (Blues job) just came along. It would have been something I would have always wanted to do after playing, but I never thought it was going to come this early. I’m quite privileged really.

A string of bad results at the start of year led to a league relegation play-off. And starting out, Phillips certainly felt the perils of coaching on your own doorstep.

“I felt it more so because it was with my own club,” he said.

“I really felt the pressure. The Blues would have never played Division Two football.

“As the manager of your home club you can't just walk away from it. We were struggling and the thoughts of relegation didn't sit well with me for a long time. I knew we were missing a lot of players and in fairness to the club they backed me the whole way. But, to answer your question, I felt enormous pressure.”

One masterstroke Phillips had pulled is the re-positioning of Colm Judge. The former Louth forward has been given a new lease of life since his switch to a sweeper.

The methodical way in which this came to pass displays how much of a deep thinker Phillips is as the alteration has changed the fortunes of both the club and the player.

“It was something I had in my head at the start of the year,” he revealed.

“Colm has given the Blues great service this last 10 or 12 years, but in the last three or four years, looking at it from a supporters’ point of view, I just felt Colm wasn't enjoying football and in a way I couldn't blame him.

“He was probably the centre of a lot of attention. He was playing up full-forward with two or three defenders hanging out of him.

“To be honest, my first idea was to play him in the half-back position, but it just clicked one day when we threw him in as sweeper. It’s just worked from there.”

Eyeing up county final opponents, the Dundalk Gaels, Phillips is not all to familiar with their approach.

“We've never came across this style of play before,” he confessed.

“We wouldn't be too dissimilar to Monasterboice (Naomh Máirtín) in the way we play and they struggled to adapt against the Gaels.

“But the way I look at it is, and we've said it all year, we are blessed with clever footballers and if we can just steer the ship to a certain extent, they are clever enough to know how to adapt if the game’s not going well.

“At some stages this year, like the Joes game wasn't going well, a lot is made of what the manager does, but the team to a certain degree did and can adapt very easily.”