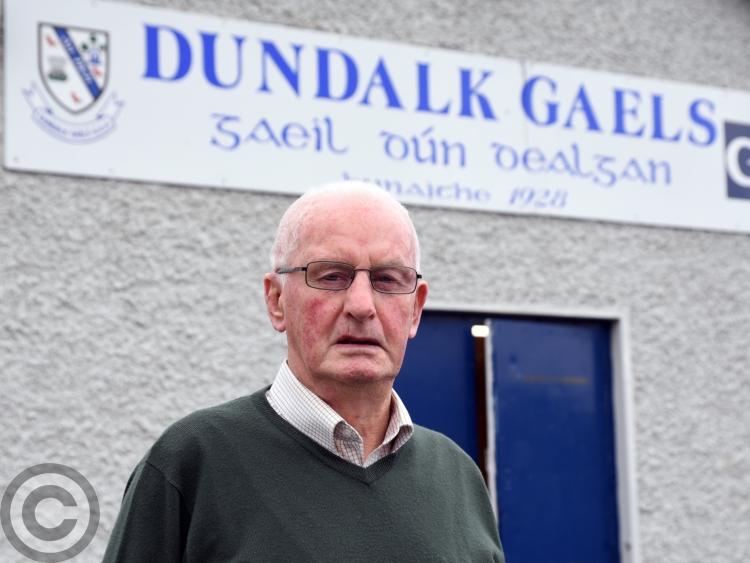 At 19-years of age, Bertie Dullaghan was one of the youngest men on the Dundalk Gaels’ last championship winning side of 1952.

Dullaghan, a Leinster Minor Championship winner with Louth in 1951, was at right-corner forward as the Ramparts men defeated Dowdallshill 0-8 to 1-2 in the all-Dundalk final played at the Athletic Grounds.

The Democrat described the game as an “Unimpressive Final” before concluding that the Gaels were the deserving victors on the basis that most of the play was in the Dowdallshill half of the field.

Favourites going into the match considering they had overcome holders Ardee, St. Mary’s and Dundalk Young Irelands in the previous rounds, they faced a Dowdallshill side who had just come up from the Junior Championship.

“I don’t remember a lot from the game itself. Myself, Cecil Reilly and Brendan Donoghue were just out of minor and I remember feeling great to be introduced into the team,” Dullaghan told the Dundalk Democrat.

“But we fancied ourselves against both the Young Irelands and Dowdallshill. In the semi-final, we beat Dundalk Young Irelands. That was a good match to be involved in, I scored a goal that day.

“And then in the final we played Dowdallshill. They had won the Junior Championship the year before and they were a fast, fit team, but we were very strong up the middle.

“We had Seán Redmond centre-full, Tony McDonnell centre-half and Frank Reid, Hubert Reynolds and Jack Regan, three of the biggest names in Louth football, at midfield and centre-forward. We felt no pressure going into the final with those guys.

“We had lost to Ardee in the final of ’51. I remember being on the bench that day. I’d say I would have collapsed had I been called on,” Bertie quipped.

Presently, the Ramparts and surrounding area is kitted out in Gaels attire ahead of Sunday’s final. This wasn’t the case before the ’52 decider as it wasn’t so much of a novelty then. The Gaels had claimed the championship in ’42 and ’45, while they lost the final in ’51, but there were certainly celebrations afterwards, even if Bertie and his comrade Donoghue weren’t aware of it.

“I went home for my tea after the game and then myself and Bertie Donoghue went to the pictures. After that we decided to go for a walk to the Ramparts, to see if there was anybody about and the hut was heaving.

“Where were you going’ they asked, but we didn’t know there was going to be a session. That’s how innocent we were because we didn’t drink and even to this day, I don’t drink,” he laughed.

“But we couldn’t repeat it and in the years after it we had strong teams. We lost in semi-finals to the Clans and the Plunketts against the run of play. We would have expected to win those games.”

The final of ’52 was memorable for another reason, namely for the Gaels’ choice of ‘keeper.

“This is famously known in the club but Niall O’Neill was our goalkeeper and he was also the county goalkeeper,” said Bertie.

“He fell ill the week before the final so the Saturday before the game Artie Connolly, who was a great clubman and a selector at the time, took me up to take shots on Eugene Duffy, who would have been young at the time, and Paddy McGee to see who he would pick.

“I was there for hours taking shots and eventually he picked Paddy, but that wouldn’t happen now. Could you imagine that happening now?”

While not altogether au fait with the current way of playing, Dullaghan has taken some pleasure at watching the Gaels forge their way to the championship final this year. He even tips them to replicate the success of ’52.

“I’ve a funny feeling that the ghosts of ’52 are going to be put behind them on Sunday,” he added.