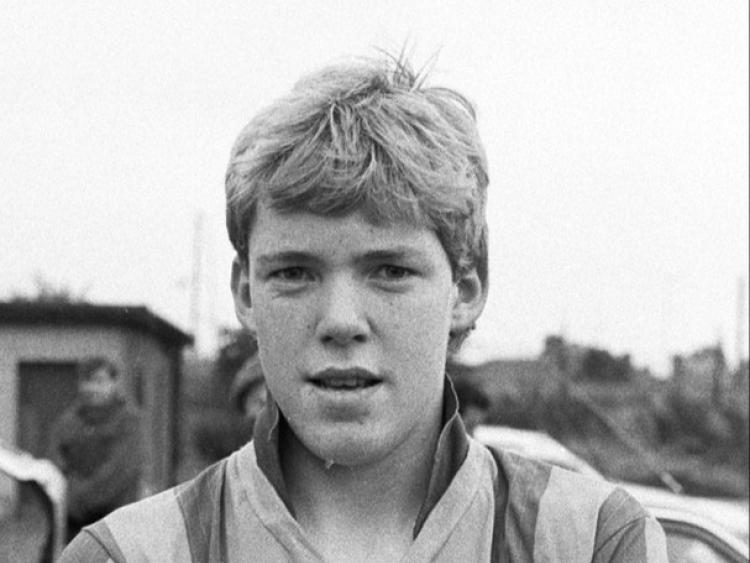 Steve Staunton prior to the 1985 championship final. (Pic: Arthur Kinahan)

Steve Staunton is the town’s proudest sporting son. A century of caps for Ireland, numerous accolades in the English top-flight and a former Irish international senior team manager. There’s hardly a more decorated Irishman, never mind a native of Dundalk.

And while he endeared himself to the Irish public for his fearless, relentless and full-blooded efforts during a career which saw him enjoy two spells with Liverpool either side of a seven-year term with Aston Villa, his performances on the local scene, and in the jersey of Clan na Gael, remain legendary to this day.

By the year Staunton made his senior bow for the Ecco Road men, as a 16-year-old in 1985, not only had the Clans failed to win a championship title for 26 years, but they hadn’t recorded a single triumph in competition for Joe Ward since 1979.

“I just remember receiving it and I think I dribbled it to the 13-metre line and shot it hard and low like I did most of the times I was in that position. I put it into the corner along the ground,” Staunton recalled when asked about his exploits in the Dowdallshill decider of ’85.

It’s a tale of folklore in the Clans at this stage, but Staunton is the man who netted the decisive goal for the Castletown outfit in their championship final with Roche Emmets 32 years ago.

After a tight, dour struggle between two very evenly matched sides, Benny McKeever – captain of the team and uncle of current player Conall – fed Staunton who jinked through a gap and buried to the net. It helped the Leslie Toal managed Clans to a 1-6 to four-points win.

Aside from the match-winning goal, Staunton is able to recall some details from the game.

“Well, I knew I was the youngest on the field,” he chuckled.

“What do I remember about a final like that, I mean it was great to be a part of such a team. It was a really good side and I was just privileged to get a jersey in it. I must have done something right to keep hold of a jersey for the season.

“It was the first time the Clans had won it in 26 years so it was a great honour and privilege to be part of that. Personally, to score the goal was great, but I remember some of the boys scoring points at crucial stages in that game to get us over the line.

“I had the freedom to go wherever I wanted and in the final, Leslie just said for me play top of the right (right-corner forward). I think Roche had somebody to man-mark me no matter where I played so he just said got top of the right and tire him out.

“I didn’t get too many kicks in the game, that man marked me pretty well but the thinking was that one of the best Roche defenders would be out of the game and that with my energy that hopefully as the game went on that I would get myself into a position to get a few important scores and I suppose it worked out in the end,” Staunton said with some satisfaction.

It was a victory which meant so much to the club, and paved the way for an avalanche of success to follow.

“The fact that the Clans hadn’t won the championship for 26 years, everyone was just delighted to get the monkey off the back. I remember the boys enjoyed themselves after the game, but I was too young and I went home and watched TV,” he said in a fit of laughter.

“There was only three of us ‘younger lads’ who started that day – himself, Gerry Curran and Seamus O’Hanlon – but it was a turning point for the club because we had so many great, young, fit and hungry fellas ready to come in and if you look at the Clans’ record after that, the amount of league and championships they won, it’s testament to those boys.”

But, with all the success, does Steve know where his medal is now?

“It’s with my two Coca-Cola (League Cup) medals and my FA Cup medal and my league championship medal.”

While always aspiring to make it on the cross-water soccer scene, Staunton enjoyed quite a bit of success with Louth teams.

From making it to a Leinster U16 final against Kildare to actually claiming his senior bow in a summer challenge match with Sligo in Drogheda, just a few months before he headed for Liverpool.

Gaelic football was a part of his upbringing. His Mayo-born father won an All-Ireland Minor Championship with the Westerners, while his elder brother, David, preceded him in playing with the Clans U14s.

And, while he was very young to be playing so prominently with the Clans senior team, from a young age it was something he was used to. He first played Gaelic football for Ard Easmuinn U10s, at the age of six. It’s an upbringing he’s thankful for, it helped mould him into the soccer player he would become.

“Gaelic has always been in the family, my father played and we all played. I mean Gaelic is the heartbeat of this country and it’s still a wonderful game,” added Staunton.

“It’s probably gone a little bit tactical like everything else, but it’s a wonderful sport and you only have to look at the All-Ireland final there and certain games, the fitness of these boys who are amateurs and how they get around the field and their level of skill and fitness is phenomenal.

“And as I always said to any of the scouts I met, I said if you’re looking at Irish boys make sure they have a GAA background for the simple reason that they’re man-marked, it doesn’t matter whether you’re a defender, a midfielder or a forward, you have a natural instinct to get away from a man and find space.

“If you look at any of us who have been successful in England, I would say 90-95%, probably even more, have a GAA background. It’s a physical game as well so from that point-of-view, it gives an edge.”

“The big thing was because I was so young that the Clans management had to come and ask permission from my Dad to actually play men at senior level. And then they wanted me to play on the ‘forty’ for certain games,” he recalls as our conversations shifted back in years.

“I can’t remember where we were, but it was earlier in the year and out in the country somewhere in mid-Louth. The team we were playing had an older centre-half and Leslie wanted me to play centre-half forward, and on him.

“My father didn’t want me to play there because he knew your man was, should we say ‘a bit physical’ off the ball. Toal just said to me ‘keep on the move and don’t stand still.’

“And so I did as he said and in the first 10 of 15 minutes of the game I put three or four-points over. After one of them I remember my sock had fallen down so I bent down to pick it up and sure enough I got a right hook, right on the nose and it splattered me.

“I can’t think of the fellas’ name, but he had a very tough 40/50 minutes after that. There was a lot of hard hitting after that and he was targeted by our quite young, but strong and big forward line after that shall we say…”

Though he might not have seen the funny side to it then, the story drew another belch of laughter from both of us. In general, that was how the conversation went. There seemed to be plenty of laughter, perhaps a reflection of just how memorable the time was in his stellar career.

While he played with some of the world’s best soccer players. Paul McGrath, Kenny Dalglish, Ian Rush, etc., it took him a minute to classify the best Gaelic footballer he soldiered alongside.

“Kevin and Seamus (O’Hanlon) were great, but Aidan Wiseman was something special. I mean he was a talent, a phenomenal Gaelic player.”

And with that our chat came an end. I thanked him, he replied, “cheers kid.”