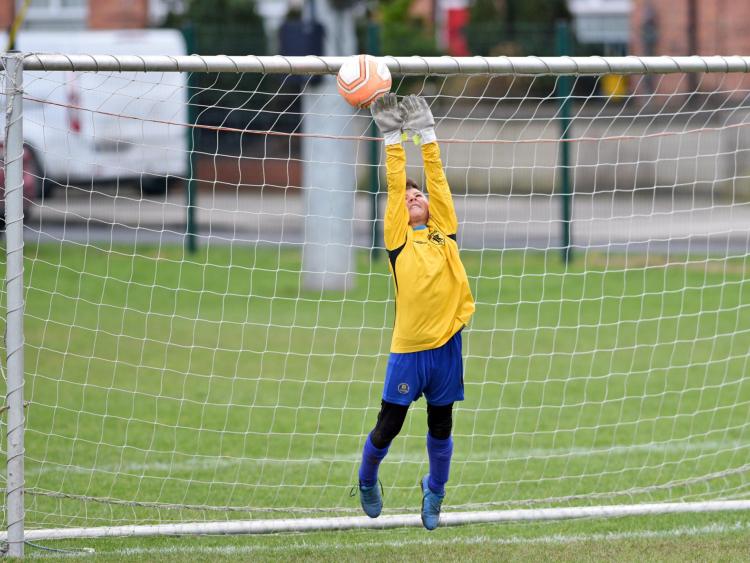 Jack McBride secured a point for St. Dominic's six-minutes from time in this high-scoring, entertaining game with Woodview in the Fairgreen on Sunday afternoon.

Kyle Schiavone’s deep left-wing cross was hammered home by Blake McConville in the fourth-minute to give St. Dominic's an early lead, but Freida Quinn brought the home side level six-minutes later when he forced his way into the penalty area before shooting low past Conor McHugh and Quinn almost scored a second goal four-minutes later after beating McHugh again, but this time Ben McGorrian cleared off the line.

Both sides were full of purpose as they attacked in numbers, an Aidan Corrigan shot was inches wide for St. Dominic's and a superb free-kick by Woodview’s Adam Finn crashed back off the crossbar.

Finn did get on the scoresheet for Woodview seven-minutes into the second-half when Alex Ward’s corner landed at his feet and he quickly fired to the roof of the net.

Woodview extended their lead three-minutes later when Finn threaded a pass through to Sean Taheny who slotted past the advancing Conor McHugh.

St. Dominic's responded in a positive fashion with former Rock Celtic player Eddie Territt forcing a good save from Stephen McMullen and they deservedly reduced the deficit on 57 minutes when McBride's left-footed strike flew into the right bottom corner of the net.

St. Dominic's were now in the ascendancy and a neat passing move started by the goalkeeper found Joseph Byrne who quickly found McBride who raced clear to slide the ball home for his second goal of the game and the leveller.

Byrne had a chance soon after to put St. Dominic's in front, but McMullen produced a fine save and Danny Tracey had a chance to win it for Woodview, but he was denied by McHugh who pushed the goal bound effort around the upright.