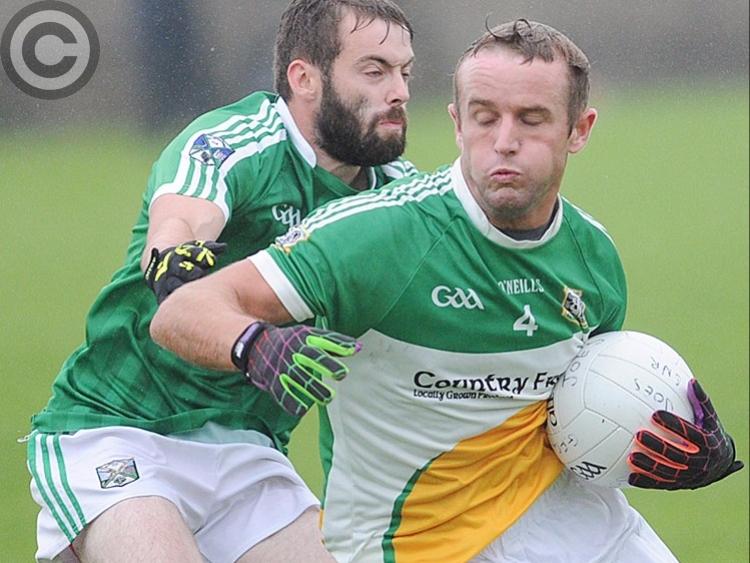 St. Josephs' Stefan Potts is confronted by Josh Arrowsmith of Geraldines in the drawn encounter at Dowdallshill. (Pic: Arthur Kinahan)

Having been level 11 times in their 0-11 apiece draw in Dowdallshill, there is evidently little between the teams.

The Gers will be hoping to welcome Shane O’Hanlon back and if he regains fitness, he would be a significant boost to Eamonn McEneaney’s charges. Mind, Adam O’Connor has returned from a summer away to retake his place in the Joes’ ranks.

Free-takers, Jim McEneaney (Gers) hit 0-6 and Alan Quigley (Joes) hit 0-5 in the drawn encounter. The pair head the hot-shots table and their influences will be key as to the outcome of this contest, particularly if the conditions are as testing as the first time around where a sodden Dowdallshill made free-flowing football impossible.

Another factor could be where the Gers intend on playing their star-man, McEneaney. If he's played at centre-forward, the Haggardstown outfit would possess a much greater attacking threat with the Louth man's point-taking and distribution abilities more suited to the withdrawn role.

Otherwise, with Conall Smyth stationed as a sweeper, McEneaney's impact could be greatly reduced.

The Joes have proven themselves capable in big championship games already this season, and those experiences may swing the game their way. However, the Gers have a wealth of championship winning experience in their ranks courtesy of their recent minor titles. It's one that's likely to go down to the wire in any case, but the Joes may just shade it.