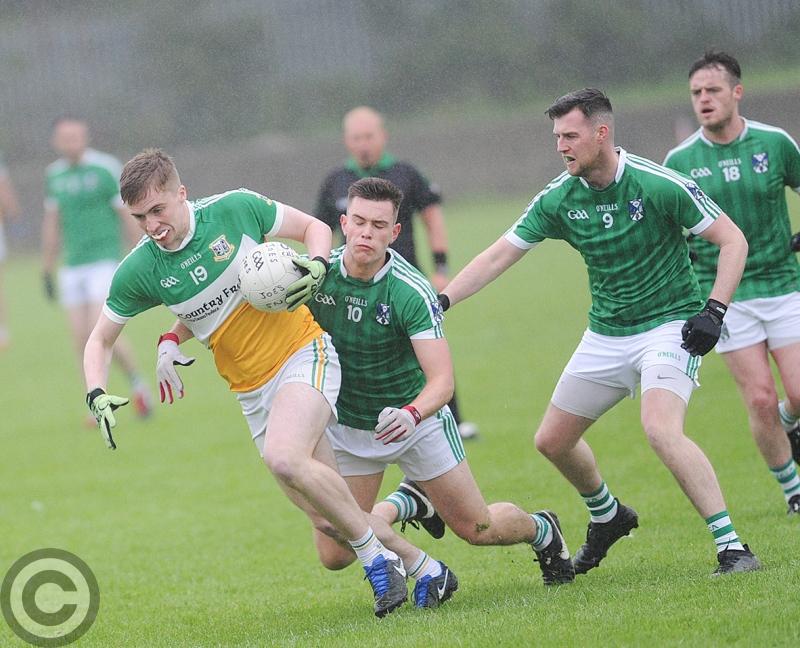 St. Joseph’s and the Geraldines were level on no fewer than 11 occasions as their Anchor Tours Louth Senior Football Championship quarter-final was sent to a replay by Alan Quigley in Dowdallshill on Sunday evening.

Quigley nailed a 45m free three-minutes into stoppage time to rescue the Joes a draw from a gripping contest. However, the forward may rue his missed goal chance with 10 minutes to play when he dragged his shot across goal and wide of the mark. A major at that point would almost certainly have swung the contest the way of the Dromiskin/Darver side.

The slippery conditions didn’t yield free-flowing football, however, the effort and bravery on show from both teams would warm the heart. Though, commendation must also go to match referee Stephen Murphy who let the game flow as much as was possible.

A draw looked the likeliest outcome from an early stage with the teams prone to cancelling the other out rather than taking the initiative themselves.

The Joes never led in the opening-half as the teams retired to the break tied at five-points apiece with Derek Mulligan (2), Quigley (2) and Conal O’Hanlon cancelling out the efforts of Josh Arrowsmith, Jim McEneaney (2), Stephen Reidy and Glen Trainor.

McEneaney was the game’s standout player with the Gers seeming to come to life upon his every possession, but even he struggled with the conditions having miscued two of his three placed-kicks into the road-end goal before half-time.

The second-period saw the Joes have much more of the play with Dáire Smyth and O’Hanlon growing into the game. Smyth granted the Joes the lead for the first time early in the second-half and they would take the lead on four more occasions before the Gers hit back.

Matthew Corcoran then struck the post as Mulligan edged the Joes in front at the other end before McEneaney registered his fifth point to bring the sides level at 0-10 each.

The Gers never threatened on goal until two-minutes from full-time when veteran Nicky Mackin came steaming through, however, his lobbed handpass was cut out by Robert Sansom before Cian McGuinness scrambled the ball to safety. It was a glorious opportunity which Mackin ought to have taken on himself.

But still the Gers poured forward and when McEneaney put a long-range free between the posts, the Joes looked a beaten team. But credit to them, the 2006 winners remained composed and by working the ball towards goal, they engineered a free – their 22nd of the match – which Quigley converted with aplomb to force a replay.