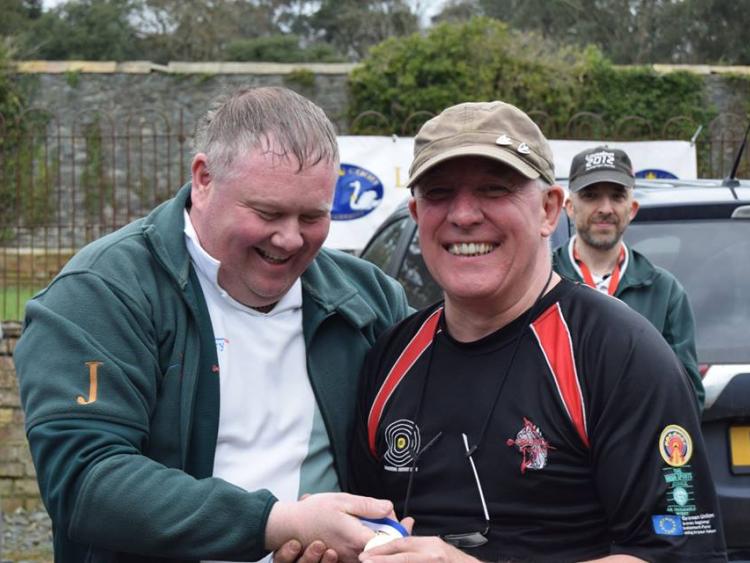 The course was shot throughout the grounds of the stately home with great mention made of the rhodendrum bushes in all colours.

Fiachra was awarded his medal by the judge John Kane on behalf of Lough Cuan Bowmen.

Last weekend, CúChulainn Archers attended the inaugral Northern Ireland Indoor Championships and as usual were one of the largest clubs in attendance. While the Juniors shot in one end of the hall, Senior groups were split into two groups to shoot 60 arrows. The first group shot early in the morning, followed by the 2nd group and the juniors at 11.30, this left the first group with a long break before everyone reconvened for Head to Heads.

Rankings are determined by your 60 arrows score and Head to Heads commence with the top seed shooting against the lower seeds. Juniors (under 21) were awarded medals after the ranking round without shooting the tense head to head competitions.

Head to Heads can be fiercely fought as archers tie scores, dropping one point can be mean the difference between making it through the next round and into the medal position, many a bead of sweat was mopped from a brow and several one arrow shoot offs were inevitable.

Medals were awarded to Brandon Dollard, who shot both in the Junior and the Senior tournaments and Ann Marie Murray, both of whomwon bronze. PBs were equaled and beaten for most club members and special mention goes to Fiachra Judge on equalling his own Irish Record and to club member Rachael McCoomb on achieving first place in the ladies compound. Rachael's son Niall also became a Northern Ireland champion in barebow.