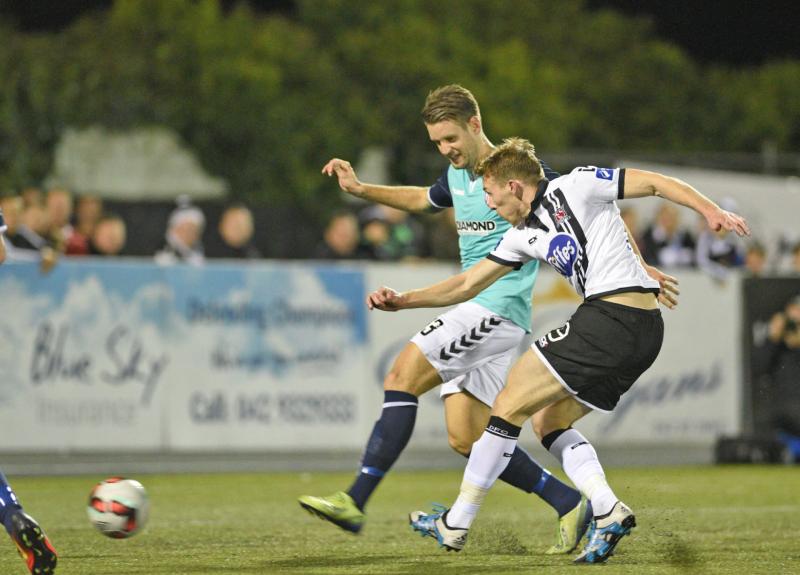 David McMillan hit the magical 20-goal mark in Friday’s win over Derry City but the striker says he is greedy for more.

The 27-year-old took his tally to 15 in the league with his 59th minute strike against The Candystripes and he is desperate to add to his five Champions League goals when Maccabi Tel Aviv arrive in Tallaght this Thursday for Dundalk’s second Europa League outing.

“Getting to 20 goals is a nice landmark but hopefully there’s more to come,” he said.

“We’re looking forward to Tel Aviv now,” he added. “We’ll have a six day rest which is as much as we’ll get at this stage of the season and we’ve a lot of video footage to watch. They’re great games to look forward to.”

Reflecting on his goal against Derry, McMillan paid tribute to the genius of Daryl Horgan for the assist.

“We’ve been looking for that one,” he said. “Daryl comes inside a good bit so I just tried to time my run and thankfully tonight it went in.

“We were free flowing and created a lot of chances tonight and we probably should have had more.

“The lads were brilliant going forward in support of me and it’s great to have players like that behind me. I know they’ll always create chances.

“It’s been mentioned that I’ve had a few chances over the last week with my left foot that didn’t go in so tonight it was nice to see that one hit the net.”

McMillan has now followed in the footsteps of Patrick Hoban and Richie Towell by hitting 20 goals in a season and his achievement was hailed by manager Stephen Kenny.

“David’s work rate is phenomenal but he needed to add more goals this season and he has responded. He was getting the same types of goals and he needed to have more in his armoury,” explained Kenny.

“He needed to start getting goals from crosses which he wasn’t doing last season. We spoke in pre-season and that was something we talked about because teams defend deep against us. A lot of his goals were from people putting him through one on one.

“All of a sudden he scored from a cross early in the season against Wexford, from a cross against FH, and all of his goals against BATE Borisov were from crosses. His movement is much better in the box now. That’s what he has added.

“He can score from outside the box, he has always had that, but it’s a different talent to be able to read and attack crosses. It’s a different skill set and he has worked on it and added to it and it has really helped us.”