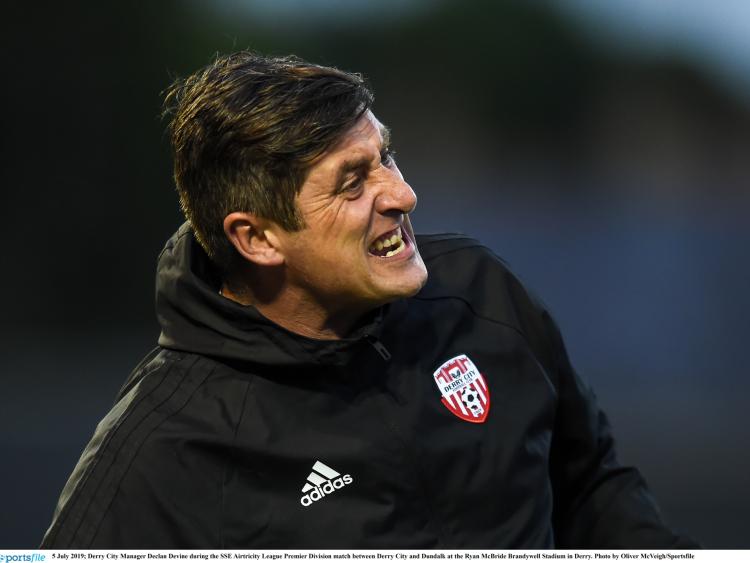 Declan Devine says his players will be “fired up” for Friday night’s League of Ireland opener against Dundalk FC. (Pic: Sportsfile)

Declan Devine says his players will be “fired up” for Friday night’s League of Ireland opener against Dundalk FC.

The Derry City manager has named returning midfielder Conor McCormack, a native of Greenore, as the club’s captain ahead of a season in which The Candystripes return to European football.

City finished fourth last term, three points behind Bohemians in third, and lost their grip on the League Cup by suffering a final defeat to Dundalk on penalties.

“My target this year is to finish higher in the league, to win two cups, qualify for Europe and keep The Brandywell full,” Devine told Drive 105. “If we do that then I’ll look back on it as a great season.

“Whether we can achieve those targets will remain to be seen, but when you start out at the start of the year you want to get better.

“I also want to get through a round in Europe and that depends on the luck of the draw. The last two times I’ve been here, the first time we got Trabzonspor - it’s very difficult to beat them, and the second time, after I left, we got Aberystwyth and that worked out relatively comfortably for the club.”

Derry took a point from both of their trips to Oriel Park last term, though they failed to accrue anything bar defeat in the return fixtures. That was a common trend across City’s meetings with the other top four components and Devine is adamant their head-to-head record has to improve.

“Last year we did cause Dundalk problems, but we didn’t win a game against them - that’s the reality,” he added. “We did not beat them, Shamrock Rovers or Bohemians, the three teams who finished above us. Our goal this year is to get a bit closer to those three teams. We want to make sure we turn the screw this year and it’s absolutely critical that we now try to take points off the top three.

“If that starts on Friday night, great, but we’re under no illusions that it’s going to be extremely difficult; they’re the league champions for a reason.

“They’ve been the main force in Irish football over a long period of time and were a penalty kick away from doing the treble - which, thankfully, they didn’t given our history in doing it.

“They’re the benchmark and we have to make sure we’re at our complete best to have a chance of getting anything out of the game.

“The players will be fired up. We’d love to have Dundalk on an off day, but Dundalk don’t tend to have too many off days over the course of a season.”

On his newly-appointed skipper, who ended a three-year stint at Cork City to rejoin The Brandywell outfit, Devine was hugely complimentary.

“The main man on the pitch this year is going to be Conor McCormack. He’s got unbelievable experience, he’s a brilliant leader on the pitch and his application since the day and hour he came into this club has been second to none.

“His statistics, running, drive and determination, bringing people with him, has been fantastic over pre-season and when we went to speak to him, he had financially better offers to go elsewhere, in the Irish League and League of Ireland, but he really wanted to come and play for Derry City.

“That, on its own, is something that really appeals to me… If the general public seen of Conor McCormack what myself and the coaching staff have seen since he’s come in, it’s a no-brainer... I think he’ll be a brilliant addition as captain this year.”

He added: “Conor was looking from the outside-in last year and one of the things he said was that he really liked what we were doing and saw the crowds that were coming to The Brandywell. He saw the togetherness of the players and supporters in really rallying the club last year. He said from day dot that he really wanted to be a part of it.

“Conor loves this football club, he has a great feeling for it and his application to training so far has been magnificent. But more than that, I think he’ll be a player on the pitch who can spit a bit of fire. He plays with a lot of aggression, but he’s also got a calming influence.

“He can show our young players - and we have a lot of young players again this year - what it takes to win matches in the League of Ireland.”