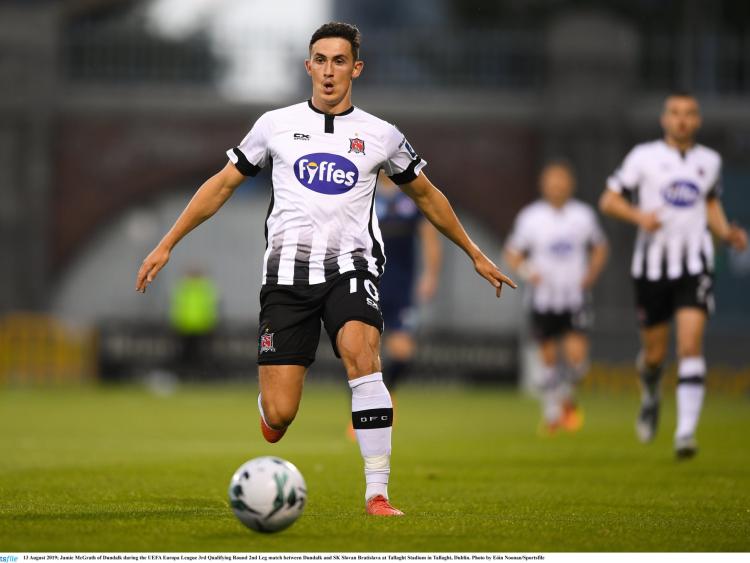 Jamie McGrath missed out on a shot at four-in-a-row, but the exciting young midfielder is back to reclaim the EA SPORTS Cup trophy. (Pic: Sportsfile)

Jamie McGrath missed out on a shot at four-in-a-row, but the exciting young midfielder is back to reclaim the EA SPORTS Cup trophy that he has been so used to winning in recent years as Dundalk FC prepare to tackle holders Derry City in a mouth- watering final on Saturday.

Shamrock Rovers are the ‘FAI Cup specialists’ who have not won one in 32 years, but McGrath is the present-day EA SPORTS Cup master having won the competition in 2015, 2016 and 2017.

The first two were with St. Patrick’s Athletic, when they defeated Galway United and Limerick in the deciders, before he collected a winners’ medal once again in his first season at Dundalk when they saw off Rovers in the final.

Incredibly, the 22-year-old – who scored in the Saints’ success at the Markets Field in 2016 – had to play all three finals in opposition territory, having had little luck in the coin-toss.

Dundalk, of course, played the 2014 decider on a memorable day at Oriel Park, but McGrath feels the one-off occasion should be decided on neutral ground. Still, he is relishing another final, having missed out on last year’s as The Lilywhites lost to Cobh Ramblers in the last four.

“It’s going to be a very tough game up in The Brandywell – we found that in the FAI Cup,” McGrath said. “It’s going to be a tough place to go; if we don’t start well, the crowd can get on top of us and make it a really hard place to be, especially in a cup final.

“Hopefully, we can bring a lot of fans as well. It’s definitely going to be an exciting one anyway. It’s a big pitch up there, so it suits both teams.

“We just want to try to get that first piece of silverware in the cabinet and it’s going to be a big, big match.”

Dundalk and Derry have had entertaining clashes this year, with the last three meetings all ending 2-2 after 90 minutes. Two of those were at The Ryan McBride Brandywell Stadium, where the Louth men are unbeaten since 2012.

“They have quality all throughout their team,” the Athboy native added. “They have a lot of attacking threats – Junior (Ogedi-Uzokwe) is a very good player, he can cause anyone problems on his day, and (David) Parkhouse has scored a lot this season.

“We’re aware of their threats. They can score from midfield as well – Greg Sloggett and Ciaron Harkin. They have attacking threats all over the pitch.

“Like I said, the crowd get behind them and it’s almost like a 12th man at times. I hope we can bring a good travelling support up. It’s probably not the most ideal time to play the match on a Saturday evening, but it’s definitely going to be a good match.”