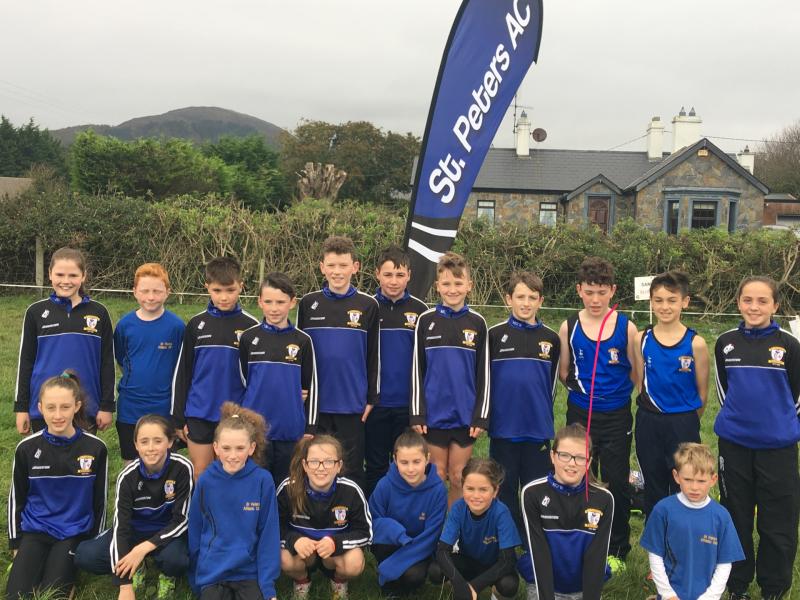 On Sunday the annual Glenmore juvenile cross country meeting took place along the Kearney Cup 5K road race. The St. Peter's Club had a great turn out with a total of twenty athletes competing over the various age groups.

The first race was the girls U9 race which once again had both Hannah and Emily O’Reilly in the medals. The girls ran neck and neck throughout the 500m course and both were in the medals with a court and seventh place finishes respectively.

The boys U9 race was next and again St. Peter’s had two representatives and both ran really well. Liam McKeown and Cain Murtagh who are both U8, but they showed great enthusiasm for the sport and their bravery will stand them in good stead for next year.

The girls U11 race which was ran over 800m had three St. Peter’s athletes, Dearbhla Allen who is enjoying a great cross country season was once again amongst the medals with a sixth place finish, both Orla McLoughlin and Catherine Carey who are both U10 ran very well and finished high up the large field of competitors.

The boys U11 race which was also ran over an eight-hundred metre course. Harry O’Reilly had another great performance and showed great resilience to hold off a late challenge to claim second place, Harry was joined in the medal podium when the ever improving Ben McKeown who put in another strong run to finish seventh, Ruairi Carpenter also produced a good performance and he was unlucky not to gain a medal placing.

The girls U13 race, which was run over a 1500m course, had four representatives from the club with Niamh Brady leading the challenge with a solid performance to be amongst the medals. Both Ellie Smyth and Lucy Smyth ran the race almost stride for stride and looked very comfortable and were unfortunate to finish outside the medals. The ever reliable Judith Bell followed closely with another strong run.

The boys U13 race had five St. Peter’s athletes competing. Mark Litchfield had a powerful run and looked to be back to himself, Cian Gorham had another good performance coming in in fourth closely followed by Sean Allen in fifth, Dean Murtagh who never lets the club down had another strong run and was unlucky not to medal and Conor Litchfield returned to competition after his recent injury lay off.

The final race involving the club was the boys U15 race where Calum Grant, who is still U14, ran his third race in three weeks which is also his third race ever and ran a very strong seventh place to collect his first individual medal which was very much deserved.

As the curtain comes down on the local cross country events, concentration now focuses on the upcoming Leinster Championships the first fixture will take place on Saturday October 28th in Navan.