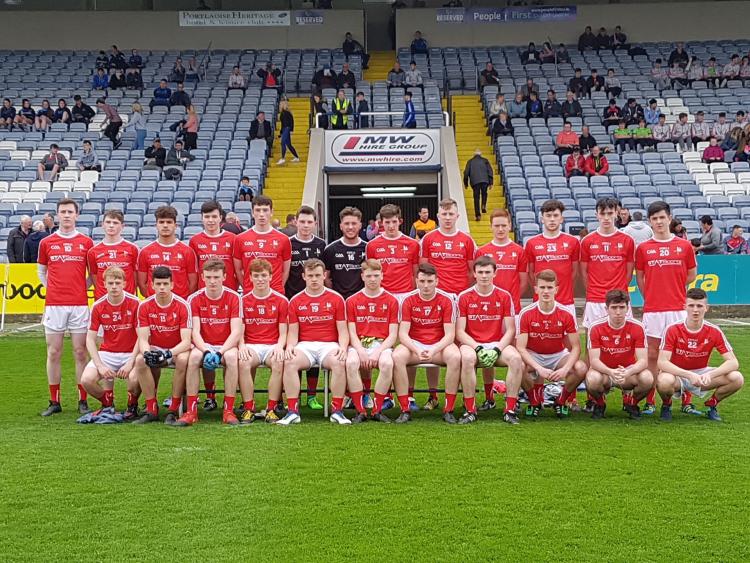 Louth minor team before their win over Laois

Wayne Kierans is looking forward to the do-or-die nature of Saturday afternoon's clash of the Louth and Offaly Minor teams at the Gaelic Grounds.

Having had to settle the posse down after their exhilarating extra-time victory over Laois a round ago, Kierans has been preaching consistency to his group since.

“This is real do-or-die stuff,” Kierans told the Dundalk Democrat.

“There is a lot of pressure associated with the game, but as I say to the players you have to embrace the pressure. If there was no pressure nobody would care if we won or lost.

“We have to keep going and making the same decisions as if it was a game with nothing at stake.

“We have only won one game but we are going into this very positive and we’re focused on improving our performance. That’s been the real buzzword in training, we have to improve our performance to move forward in the competition.

“And I think the way we’re training, the way our attitude is and the way our commitment is, I think we will improve our performance and by-product of that is that we’ll have a great chance of winning.

“We don’t want our season to end on Saturday so we have to do everything we can to prevent that,” Kierans added.

With the draw having been made last Sunday week, the Minor boss has had time to research the strengths and weaknesses of Offaly, with their goal-hungry attack something that Kierans admits Louth must pay due diligence to.

Indeed, the Faithful have bagged 12 goals in just five competitive encounters this year.

“We know a bit about them. We got some clips of their previous game against Westmeath so we know that they’re strong in attack and have very potent forwards.

“It’s (Offaly’s goal threat) definitely something we’re conscious of, there’s no doubt about it. But, regardless whether it was goals or not, we conceded 15-points against Laois and that is something that we’re looking to reduce.

“We want to reduce what they score but we’re also aware that they have a couple of very potent forwards so we’ll be making provisions for them.

“However, our full-back line is one of our strongest lines so we’ll give as good as we’ll get,” he said.

Unlike other years where one teams stands out from the others, Kierans feels the Leinster Minor grade has a very even spectrum this year, judging by results.

“Offaly have had two games in Leinster but I think the fact that we came through the Laois game and it was such an epic game. I don’t think they have an advantage with us having played extra game.

“The thing about it is, no matter who beats who, all the teams are very well matched. There is no outstanding team who are way out in front.

“I was at the Laois game against Meath last Saturday (week), we beat Laois and Dublin beat Meath, and there was one-point in it.

“I was at Westmeath and Carlow as well and Carlow also won by a point so the historically strong counties like Dublin and Kildare are maybe a wee bit ahead, but everyone else are fighting more or less on the same level.

Negativity is something which has shrouded Louth underage teams in the past, however, this year’s different with the victory in Portlaoise seemingly changing the mindset of supporters and players alike.

“It was definitely a fillet for us and the rest of the county to win in Portlaoise, admitted Kierans.

“The reaction and positivity from within the county has been great and that’s not really something you would have associated with Louth Minor teams in the past.

“There was always a negativity there that we couldn’t compete, but the support has been excellent since our win over Laois.”

In terms of injuries and leaving cert commitments, Kierans is confident he will have a full panel at his disposal this weekend.

“There were a couple of minor situations but they’re nothing that will keep anyone out. We went to Drogheda on Saturday for a session and we’ll do another one there this week so everybody is looking good at the minute,” the O’Connell’s man said.

“There are more than 10 lads doing their Leaving Cert so it’s difficult for them. The plus side is that if we win the Offaly game our next game is not until the exams are finished.

“The lads are juggling their commitments very, very well and we have no issues with them whatsoever,” added Kierans.