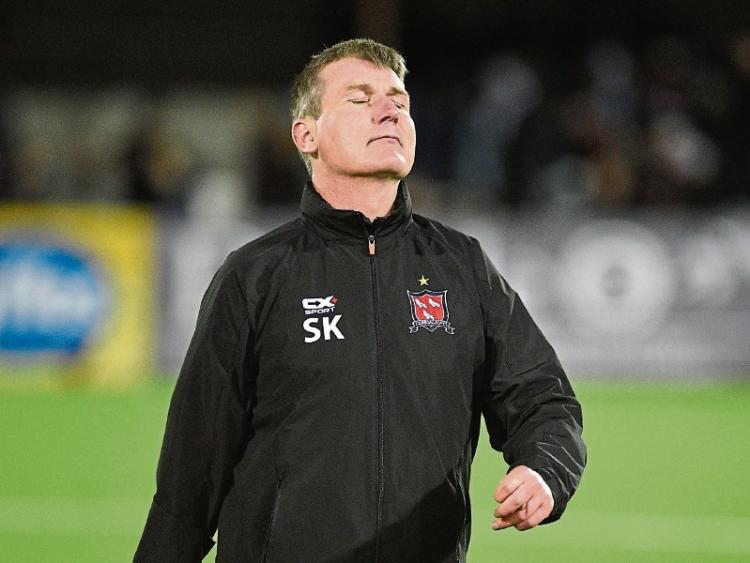 Stephen Kenny has said that referee Jim McKell refused to speak with him about the events which led to the official awarding Bray two penalties in the second-half of Friday night’s defeat at Oriel Park.

The Dundalk manager confronted the referee on the pitch shortly after the full-time whistle but McKell refused to offer the Dubliner any reasons for awarding the spot-kicks.

“I’ve watched both decisions back penalties on the video and neither of them are penalties.

“I didn’t think they were legitimate (penalties), I think the decisions (to award them) were poor and I’m very disappointed with them.”

Kenny pointed to the decision to award Bray’s second penalty as being particularly bizarre, especially seeing as Chris Shields was penalised for what looked like an excellent challenge moments before Ryan Brennan fell inside the area for which the spot-kick was awarded

“I’ve never experienced the bizarreness of the second penalty before,” the Dundalk manager added.

“It wasn’t free-kick, it clearly wasn’t a free-kick and that’s really hard to accept.

“(The first penalty) was a kick in the teeth for the players and they showed their character to come back and get the equaliser but when the second penalty went in we lost our heads a little bit,

“We could have been a bit calmer because the players were generally in the ascendency without playing as well as they could.

“It’s very disappointing. We just have to accept the penalty and that’s the way it is.”

When asked whether Kenny’s midweek statement which questioned the lack of penalties awarded to his side had any bearing on the referee’s decision process, Kenny replied:

“You’d like to think not but obviously, it did.

“You would think the referee would be elective, that anything else would be irrelevant and he would take each game on its merits but that doesn’t seem to have been the case.

“It’s a bad night for us and I think it’s very, very disappointing but we just have to accept it and move on.

“We have got to focus on winning next week against Bohemians. That’s all we can do,” he concluded.