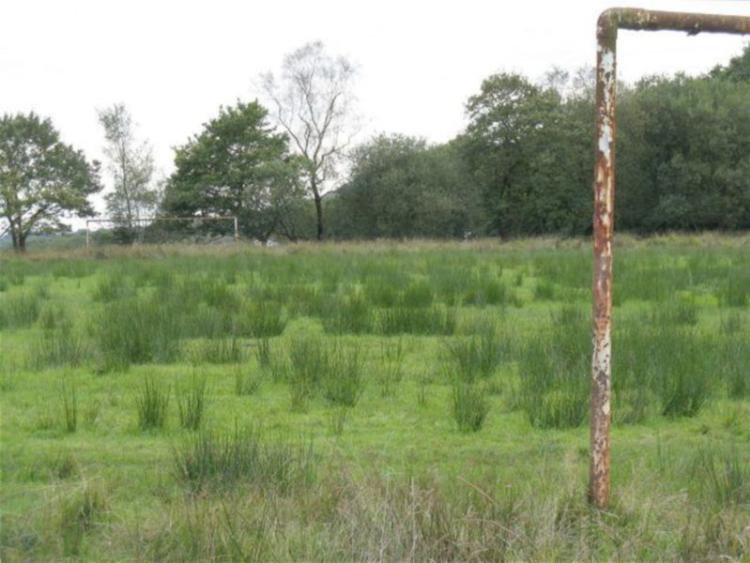 It's a lumpy field more than anything else right now. The grass has snaked up the bottoms of the goalposts and the outline of a former football pitch have long since washed away. But it's a start. It's a 'something'.

As if dropped in the middle of a housing estate in town, this patch of grass is completely surrounded on all sides - a grassy fort under urban siege. But it's something and it's a start. And, I actually like it's style, or complete lack there of.

It'll take graft and elbow grease. Sweat and blood. But it'll soon be home for a little football club that I'm quite proud of.

Rampart Celtic might raise a shrug of the shoulders more than anything else. It's a junior soccer side plying its trade in the Dundalk Summer League and Winter League. Ten seasons have come and gone since it was founded. But after leading a nomadic existence for that decade, a home for the club has been secured. A place to build something that could last, hopefully another decade, perhaps even longer.

Soccer in this country has always been the less well funded of the two codes. The poor relation looking in the GAA window at the glowing hearth. The GAA have a remarkable system and have been quite brilliant in growing and building from local club level right to the very top county sides.

Soccer, of which I always leaned towards more, has never had quite the support in terms of finance in Ireland.

I remember quite vividly the difference between the two codes in this regard. I played both until my teenage years drained away. Saturday was soccer; Sunday GAA. That was the split. Simple and easy to follow. However, the difference in facilities and general community support couldn't have been greater.

On Saturday, while lining out for the now defunct Seatown FC, I'd have to bare my (then) hairless backside to the elements on more than one occasion ahead of a match, as dressingrooms were considered an incredible luxury and something only a few could afford - an old lorry container was more often than not a welcome relief. So you quite often had a team of youngsters struggling to undress on a grass bank with a breaze that would shatter teeth and rain whipping in horizontally.

It was grim and just a little depressing to be honest. The pitches weren't much better. Invariably there was some sort of a slant on the pitch, which benefited each side for one half and then became an Everest for the other.

The white lines of the pitch were also a little 'off' - like as if a toddler got loose with the linemarker while chasing a butterfly.

Sunday, meanwhile, was a step into Beverly Hills in comparison. I was a Dundalk Gaels man. So the clubrooms on the Ramparts were something to behold. There was no need for the manager to take the kit home and wash it in their own utility room - much to the chargrin of the wife, no doubt. No, there was showers, and toilets and radiators with actual heat coming off them. It was all so much better looking back on it.

Perhaps it's the eternal underdog in me, but I always had a soft spot for the ever impoverished soccer lads.

And now with a pitch sorted for my own club, it's come full circle once again.

My time playing on the pitch is nearly up, but it's nice to know that a legacy will be left and that there is a healthy chance that Rampart Celtic FC might have a future beyond my days.

It's these little things that you do within your community that matter most. The things that usually go unnoticed, but you can look back on with a real sense of pride.