OBITUARY: May Marry was famous for her wheaten bread and her scones 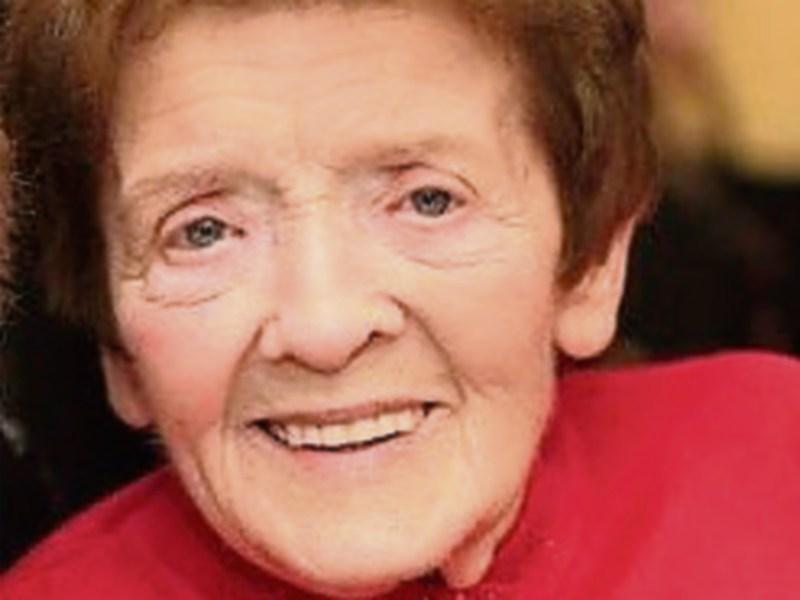 May Marry passed away peacefully at her home in Newtown, Knockbridge, Dundalk on 10th March surrounded by her family. She was 91 years old.

May was born in January 1929 in Loch an Tarbh, Knockbridge. First girl to Thomas and Kitty Brennan, May had three brothers, John, Joe, Pat and two sisters, Nancy and Judy. She went to school in Knockbridge National School and then on to the Tech in Dundalk. May spent a lot of her childhood in Brodigans shop in the village with Pat and Julia (her uncle and aunt) helping in the shop.

She spent her youth going to dances all over the county and further afield on her bike and playing Camogie with St. Brides. She also spent a number of summers in An Gaeltacht in Rannafast Co. Donegal and was very proud of her gold Fainne which she achieved for her knowledge of the Irish language. She was also the holder of a gold pioneer pin.

After school she got a job in Woolworths in Clanbrassil St. where she spent many happy days and made many lifetime friends.

In 1962 she married Nicholas Marry and they built their home in Newtown. In 1980 her life changed forever, Nicholas died suddenly and she was left rearing her four children Nuala, Colm, Declan and Enda on her own. She got great support from friends and neighbours who helped her during those very difficult years.

May was very happy at home in Knockbridge, but made many trips across the Atlantic to the US where she visited extended family of Brennans and Brodigans. She loved to return from these trips loaded with gifts for all the family. Also summer wouldn’t be the same without the visit west to the Galway Races which she did for 50 years. Again everybody was welcome to stay in ‘May’s house’ in Galway which she rented from year to year.

May was happiest when she was helping in Brodigans shop turning the rashers which she continued to do into her 80s, taking a trip to Blackrock for an ice cream or going to the football and camogie matches to support St. Brides which she continued to do right to the end. She was famous for her wheaten bread and her scones which she supplied for the St Brides AGM every year. She loved her home and everybody was welcome there. Every American relative stayed in May’s at some stage over the years, one regret was that we should have kept a visitor’s book in the house, so many passed through her home.

In the last few years May’s health deteriorated but she always kept her spirits up and accepted everything as Gods will. Her friends and neighbours were so kind calling to see her religiously week after week and they were always guaranteed a good chat and a laugh. As one of her old friends who would have called in looking for advice, noted, May would never tell you what do, but you always left with the answer! She was also blessed to have been cared for so well by a number of great people.

May is survived by her sister Judy Kelly, her sons Colm, Declan, Enda and her daughter Nuala. Her daughters-in-law Connie, Siobhan, Claire and son-in-law David Hoey. Her nine grandchildren who she was so proud of Caoimhe, Daire and Conor Hoey, Emma, Sean, Ciara, Shane, Aoife and Colin Marry, brother-in-law, sister-in-law, nephews, nieces relatives and friends.

She was predeceased by her husband Nicholas (1980), her brothers Joe, John (Cavan) and Pat (Boiler) England and her sister Nancy Wynne.

After reposing at her home her remains were carried from her home by members of her family and St Brides GFC to St Marys church, Knockbridge. A guard of honour was provided by St Brides Camogie club and St Brides GFC where Fr Gerard Campbell PP Knockbridge concelebrated her funeral mass with Fr Oliver Brennan and Fr Niall Coughlan. The readings were read by granddaughters Caoimhe Hoey and Emma Marry. Prayers of the faithful were by her grandchildren and nieces Padraigin McCaughey, Briege McKeown and her neighbour Maire McConville. Symbols of her life were brought to the altar by grandchildren and neighbours Colm Smyth and Roma Daly. Music was by Ruth Kelly and Paddy Neary.