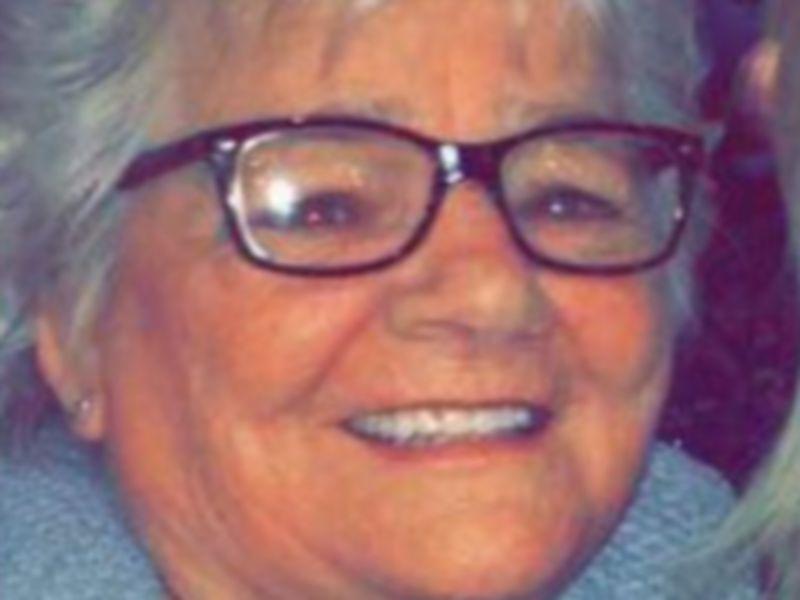 Catherine Mary Weldon (nee Duffy) was born on the 20th February 1946 at home to parents Josie and Eddie Duffy.

The ninth oldest of thirteen children, (6 girls and 7 boys). Shortly afterwards she became affectionately known as “Kit”, a name which stuck with her for the rest of her life. She was born and reared in 2 Oliver Plunkett Park in the north end of the town

Kit attended Castletown Girls School where she showed a great aptitude and love for Irish. When she finished Primary School, she managed to gain a scholarship to St Vincent’s Secondary school. This never came to be as she had to go out to work, as was the need at the time. (This was probably her biggest regret in life, as she always dreamed of being a Nurse.)

Her first job was in the old Tweed Factory in Broughton Street, she also worked in Clarkes Shoe factory as well as in Dunnes Stores in Cox’s Demesne, St Oliver’s (Hill Top) and Coxs Demesne Youth and Community Project in her later years

Kit fell in love and married Patsy Weldon from Dromiskin in July 1968. They lived for a short while in the White House, Dromiskin before finally settling in 215 Cedarwood Park, Dundalk, to this day the family home. They had three children, Niall, Garrett and Padraig. Sadly, after 28 years of marriage and still at a very young age Patsy, Kit’s husband, died on the 26th October 1996 aged 53. This loss had a profound effect on her, losing her soul mate and best friend.

Kit Duffy as most people know her, will always be associated with the Redeemer Community Centre of which she was a founder and Board Member until her passing, working tirelessly and selflessly for it’s development and those that benefited from it. She was heavily involved in the Redeemer and Cox’s Demesne Communities helping out with the Redeemer Majorettes, being an original Board Member of the Cox’s Demesne Youth and Community Project as well as helping set up and run the Redeemer Indoor Bowling Club. She spent many Summers also volunteering for the local Redeemer Summer Youth Project, giving of her time freely.

Kit was a Diabetic for almost 40 years, more recently she had issues with her kidneys, leading her to attend dialysis three times weekly, which gave her a great quality of life over the last three years. At a visit to dialysis in mid November she was admitted to the Lourdes Hospital feeling very poorly. Her condition deteriorated and while in Intensive Care she sadly passed away peacefully in the early hours of Thursday 28th November surrounded by close family.

Her mass was celebrated by Fr Shajan Panachickal Michael and co-celebrated by Fr Jim Carroll. The Symbols of her Life, a set of committee minutes, a book, a radio, an indoor bowling ball and a Tree of Life were taken to the alter by life-long friends Rosie Mc Gee, Kathleen Woods, Alice Mc Gee, Annie Cummins and Majella Weldon. An explanation of each symbol was read out by her sister Jo Kerley. Peggy Doyle and Helen O Brennan brought up the offertory gifts.

The Readings were read by two of her grandsons Tiernan and Eoghan Weldon. The Prayers of the Faithful were delivered by Grandson Oisin Weldon, nephews Keith Lambe and Conor Kerley and nieces Katie and Fionnuala Kerley. A very heartfelt, personal and honest eulogy was delivered by Fr Jim Carroll. He focused on her community spirit, compassion for others and sincerity. At the conclusion of the mass a Reflection focusing on her life, Kit’s influence on her community and the many people she affected positively whom she came in contact with on her life’s journey was delivered by two of her sons Niall and Garrett.

Her funeral mass was one of the largest attended in the Church of the Holy Redeemer in many years, with similar large numbers calling to the family home for her wake. This clearly highlighted the esteem she was held in both by the local and greater Dundalk Community. The Weldon and Duffy families would like to recognize the amazing work of the many professionals who cared for Kit in the Mater and Beaumount Hospitals, the Beacon in Drogheda were she received dialysis and especially the Intensive Care Unit Team in the Lourdes Hospital, Drogheda.

A debt of gratitude is also acknowledged to Comfort Carers, Paul and Rose (her taxi drivers to dialysis), The Redeemer Family Resource Centre, Clan na Gael GFC and Shevlins for their support and professionalism around the time of her funeral. A number of priests namely Fr Michael Sheehan, Fr Padraig Keenan, Fr John O Leary and Fr Peter Murphy called to offer their support and prayers, this was greatly appreciated.

She is survived by her three sons, Niall, Garrett and Paudie, Daughters in Law, Sandra and Ciara and grandchildren Naoise, Tiernan, Fionn, Eoghan and Oisin. She was pre-deceased by her husband Patsy, Mother Josie and Father Eddie as well as brothers Brendan and Peter and sisters May and Josephine. Her siblings, Nuala, Ann and Jo as well as Pat, Johnny, Eddie, Mickey and Gerry survive her, as well as her 23 nephews and 19 nieces.

Kit was a sister, daughter, wife, friend, helper, carer, listener, opinionated, funny, thoughtful, emotional, a person who went the extra mile, would give you the coat off her back, a strong woman with great morals and values. A woman with great compassion for people and passion for life, who rarely let anything best her. A person we were all happy to know and be with.