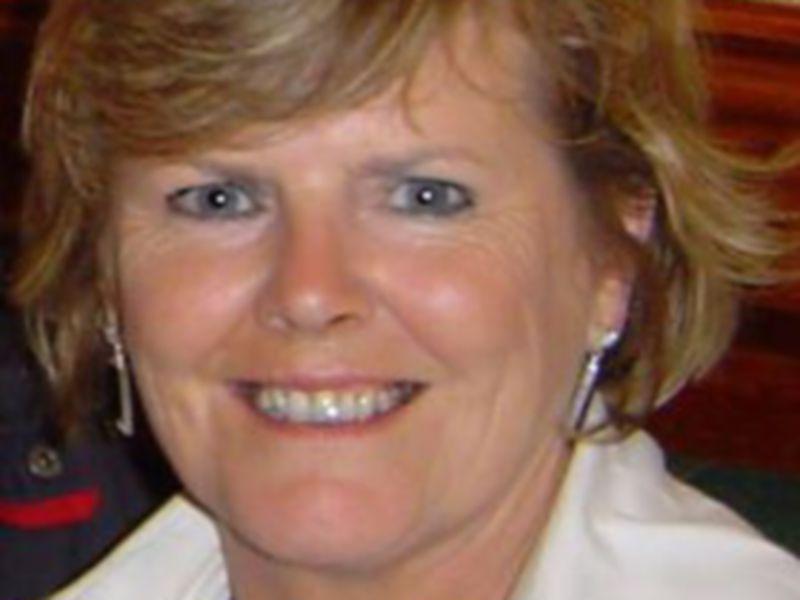 Thérèse Bellew of Marian Park, Dundalk, died peacefully at her home in the loving arms of her mother and family on February 25, 2019.

Predeceased by her father, her big brother Seámus, Muirhevnamór and her sister-in-law Sarah, Meadow Grove, she was the second youngest child of Jimmy and Theresa Bellew, Marian Park, and a younger sister to Briege Devoy, Balbriggan, Maisie McGuinness, Bellurgan, Martin Bellew, Meadow Grove, a big sister to Gerard Bellew, Mill Street and fiancé to John Moore.

Thérèse had a special bond with all members of her family and is also deeply missed by her brothers-in-law, Tommy and Tom, her sisters-in-law, Marion and Julie, nieces, Michelle, Lisa, Donna, Laura, Dara, Carolyn, Jennifer, Siobhán and Emma and nephews, Mark, James, James, David, Stephen and Seán.

Thérèse is also missed by her 19 great nieces and nephews, her aunts, cousins and very large circle of friends.

Thérèse was born at home in July 1959 in the relatively new Marian Park, where she lived all her life.

Her love of travel then took her to work for O’Callaghan Travel where she spent almost 20 years. This was followed by five years in BTI Travel in Dublin.

Thérèse was the life and soul of every party; she loved people, making friends and she had very many passions.

Music featured strongly in her life from a young age. She was a talented musician, completing numerous grades of piano. She also turned her hand to the guitar and ukulele in recent years and played with her siblings in the Wee House on a Monday night.

In addition to her love of music and singing she re-kindled her love of Irish dancing in later years.

Thérèse loved to sing and participate in family gatherings, which always seemed to end with a chorus from the Sound of Music and a rendition of “Billy don’t be a Hero.”

As a teenager, under the direction of her late father Jimmy, she was a member of the Redeemer choir and the Marian Park Variety Group which won numerous awards all over the country.

She was particularly involved in the dance troupes, graduating from the Philcollettes to the Marianettes over the years.

Thérèse was delighted to take part in the Dundalk Heritage concert in 1989, where she and her sisters joined other neighbours when the Philcollettes took to the stage again one more time.

Thérèse’s love of style and fashion was well known. This was highlighted when she was chosen as a finalist in the Dundalk Maytime Festival Queen competition.

Fashion tips and make-up with auntie Thérèse was a regular treat and her nieces loved nothing better. Thérèse also had beautiful handwriting and this was frequently commented upon. Thérèse was a trailblazer and loved to travel. She visited many exotic locations with her mother and in later years with John.

Her nieces and nephews all have great memories of the many presents that were brought from far-flung locations, long before anyone else they knew had travelled there.

Her favourite destination in later years was Portugal where every summer she joined the extended family holiday. Thérèse and John loved to return to Albuferia for the New Year’s Eve Gala Ball in the Sole Mar, which became an annual tradition for them.

Sport was another passion of Thérèse and was one that she shared with her fiancé John. Throughout her life and especially in recent years, Thérèse and John could be seen supporting their beloved Dundalk FC both home and away.

Following her death, she was thoughtfully included in a one minute’s silence at the next home match in Oriel Park.

Their fishing expeditions on the white lake and interest in horse-racing were other sporting pursuits which they enjoyed together.

Thérèse was an avid cyclist and completed two maracycles, a journey of two hundred miles from Dublin to Belfast return, for charity.

She was fortunate to have lifelong friends from her childhood and continued to make strong and lasting friendships throughout her working and social life. Her family were touched by the number of people from the many different parts of her life who have made contact since her untimely death.

Thérèse was also very interested in politics and from a young age helped both her father Jimmy and her brother Martin during election time.

Her parents taught her the importance of contributing to the community which encouraged her to become involved in several committees within the Cuchullain Credit Union and to serve as a Eucharistic Minister in the Redeemer parish for a number of years.

Thérèse’s last employment was with AV Direct where she was popular with both customers and colleagues, of whom she was very fond. It was during this time her illness was diagnosed. The support given to her by AV Direct was much appreciated by Thérèse and her family.