OBITUARY: Gertie Gernon was a very proud grandmother to fifteen 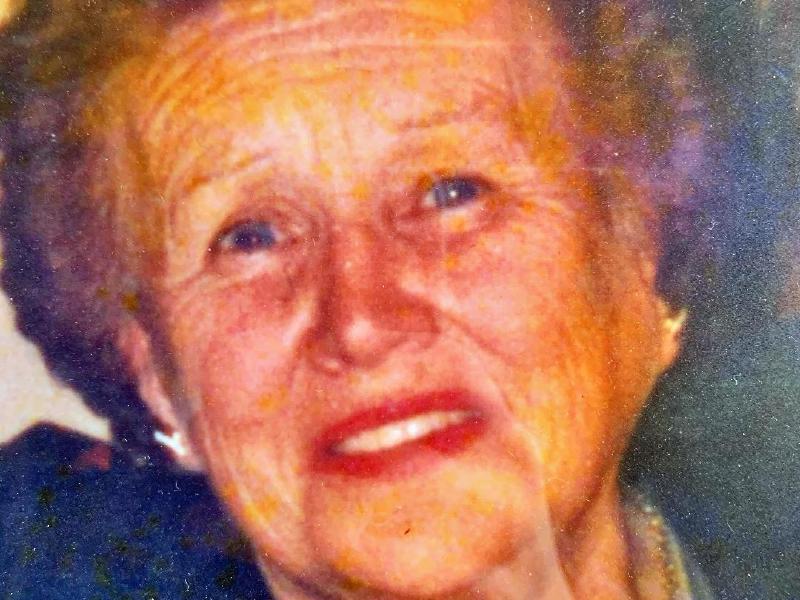 Gertie Gernon died peacefully on January 13th last surrounded by her family at her home at Tullycahan, Louth where she lived with her husband Stephen (Stephie).

She was a highly respected lady, a devoted wife, mother and grandmother.

Gertie’s early years were spent in Mount Avenue in Dundalk. She was the youngest of three children of the late Jack and May McCartan.

She was barely a teenager when her father Jack died, leaving her mother to take care of the three young children. Her mother May, an avid knitter and embroiderer, fostered and encouraged Gertie’s love of the crafts.

Gertie soon excelled at both and added the desire to bake to her resume. She was a brilliant cook and loved baking. Her mouth-watering chocolate éclairs were a particular favourite with young and old.

The Gernon household, in the run up to Christmas, was a hive of activity as Gertie made pudding after pudding for family and friends.

Gertie met Stephen (Stephie) in the town hall in Dundalk in 1955 and three years later married in Patrick’s church in the town.

She swapped the urban life for one on the farm, adjusting quite seamlessly to country living.

She loved her native town, but home was the green fields and the countryside of Tullycahan where she lived happily all her married life of sixty-two years.

Enjoying peace and tranquillity while pottering in the garden, with the sun shining, brought her immense joy.

Family came before all else.

Gertie was the very proud grandmother to 15 grandchildren and one great grandson.

She doted on her grandchildren and loved nothing better than to go shopping and perhaps buy a much-wanted treat.

She was always available and delighted to collect her grandchildren whenever necessary, be it from school or football.

The grandchildren were equally delighted as they knew Nana was sure to have a piping hot dinner ready for them to enjoy.

Gertie was the one all family members, young or old, turned to if they had a problem.

They could rely on an understanding ear and good advice would always follow.

Gertie loved music and dancing and enjoyed going to concerts to hear the old showbands.

She supported Saint Mochtas football club by, as she would put it “not attending the games” as she felt it would bring them bad luck. Instead she listened intently to the local radio station, cheering from afar.

Gertie loved animals especially dogs who were an integral part of the family.

She had a special way with them, and once boundaries had been established, the love she lavished on them was returned ten-fold.

This was never more evident than over the past two years as Heidi, the German shepherd, often adopted a protective stance for her beloved mistress.

Her family are sincerely grateful to the team of carers for the care given and to Dr Henry and Dr Hogan for the kindness and understanding shown to Gertie.

She is survived by husband, Stephen (Stephie), sons, Stephen and Greg, daughters, Valerie, Linda and Vicky, 15 grandchildren, great grandson who was born only weeks before she died, sons-in-law, daughters in-law, nephews, nieces, relatives and friends.

She reposed at McGeough’s Funeral home on the Tuesday 14th before making her final journey home and removed from there to the Church of the Immaculate Conception on Wednesday 15th January.

Valerie also along with her two sisters Linda and Vicky laid the gifts before the altar that symbolised their mother’s life. These included a picture of her with her 15 grandchildren, an apron and cookbook and a picture of her beloved dog Heidi.

The Offertory gifts were brought to the altar by daughters-in-law, Josephine and Fiona

The Readings and Prayers of the Faithful were read by her grandchildren.

The music was provided by singer Ruth Kelly.

Gertie was predeceased by her parents Jack and May McCartan, her sister Una and brother Pat.

Gertie’s Month’s Mind Mass in on Saturday, February 15 at 7.30pm in the Church of the Immaculate Conception, Louth.