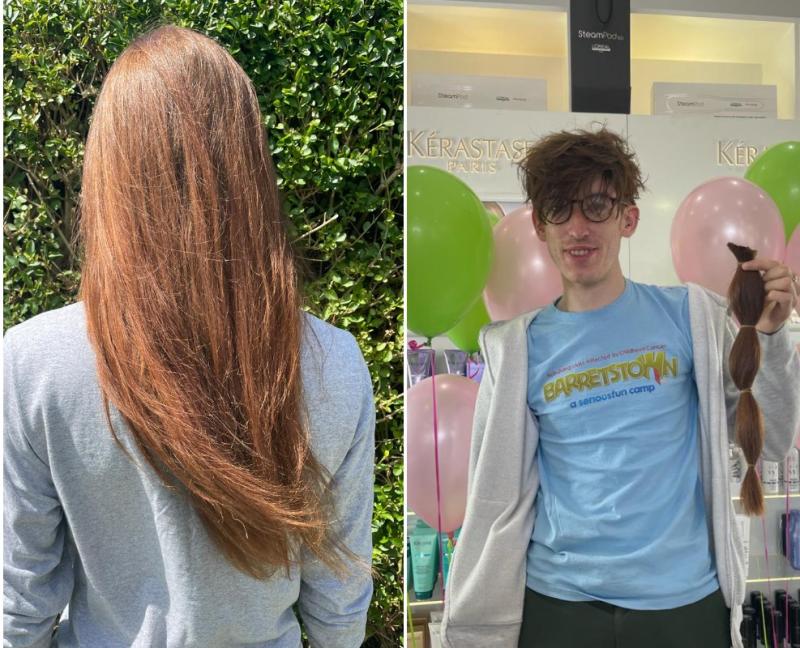 A local Dundalk musician has cut his hair in aid of the Rapunzel Foundation while raising over €28,000 for Barretstown.

Tadhg Mulligan, a traditional musician from Dundalk, has cut and donated his hair to the Rapunzel Foundation, all while undertaking a fundraising drive for Barretstown which has raised €28,000 for the charity group.

According to Tadhg, who got his hair cut at Profile Hair Design Mullingar, said that there was a big welcome when he arrived at the salon, with balloons to celebrate the occasion.

Tadhg says that he had planned to cut between 25 and 27 inches of hair off, but wasn't sure what the final length of his hair was when it was cut.

“I didn’t realise how fecking long it was,” said Tadhg, laughing.

For Tadhg, the fundraising work has been “magical”, with him mentioning how the funds have poured into his Just Giving page.

“It’s going to help so many families and patients that attend Barretstown. They rely completely on support... It’s fantastic.”

“It’s quite magical to see it all happening around you in real-time.”

“It makes me feel, ultimately, so so proud of my friends from Dundalk and from the traditional music scene, for my family for all the support. So many people got behind it.”

Alongside raising the huge amount of funds for Barretstown, Tadhg is now set to volunteer with the organisation from late August.

“I did an interview with them, and they’ve accepted me now to volunteer in August,” said Tadhg.

“I’ve done a training course with them since that as well and I’m really looking forward to going down.”

Tadhg thanked everyone who donated to the campaign and shared his message on social media over the past few weeks.

For Tadhg, he says that Barretstown is a particularly important cause for him, having spent time with the charity in their camps due to having leukaemia as a child.

Since he started the fundraising campaign, Tadhg has smashed every single fundraising goal, hitting 28 times his original goal of €1,000.

He has also carried out bucket collections in the Square in Dundalk, playing traditional music with songs like the Red Haired Boy or The Jolly Beggar Man.

On one occasion, he was joined by local folk legends The Mary Wallopers for an impromptu trad session in the centre of town.

Recently, he hosted a “Breakfast Busk” at Wuxi, where he works, to help drum up additional support for his charity drive.

According to Tadhg, there was massive support from those at the company, raising over €1,600 in donations across a few hours of busking.

The fundraising efforts are still ongoing, however, with anyone interested in donating able to visit www.justgiving.ie, and searching for Tadhg Mulligan.